In Which I Meet Alexander McCall Smith 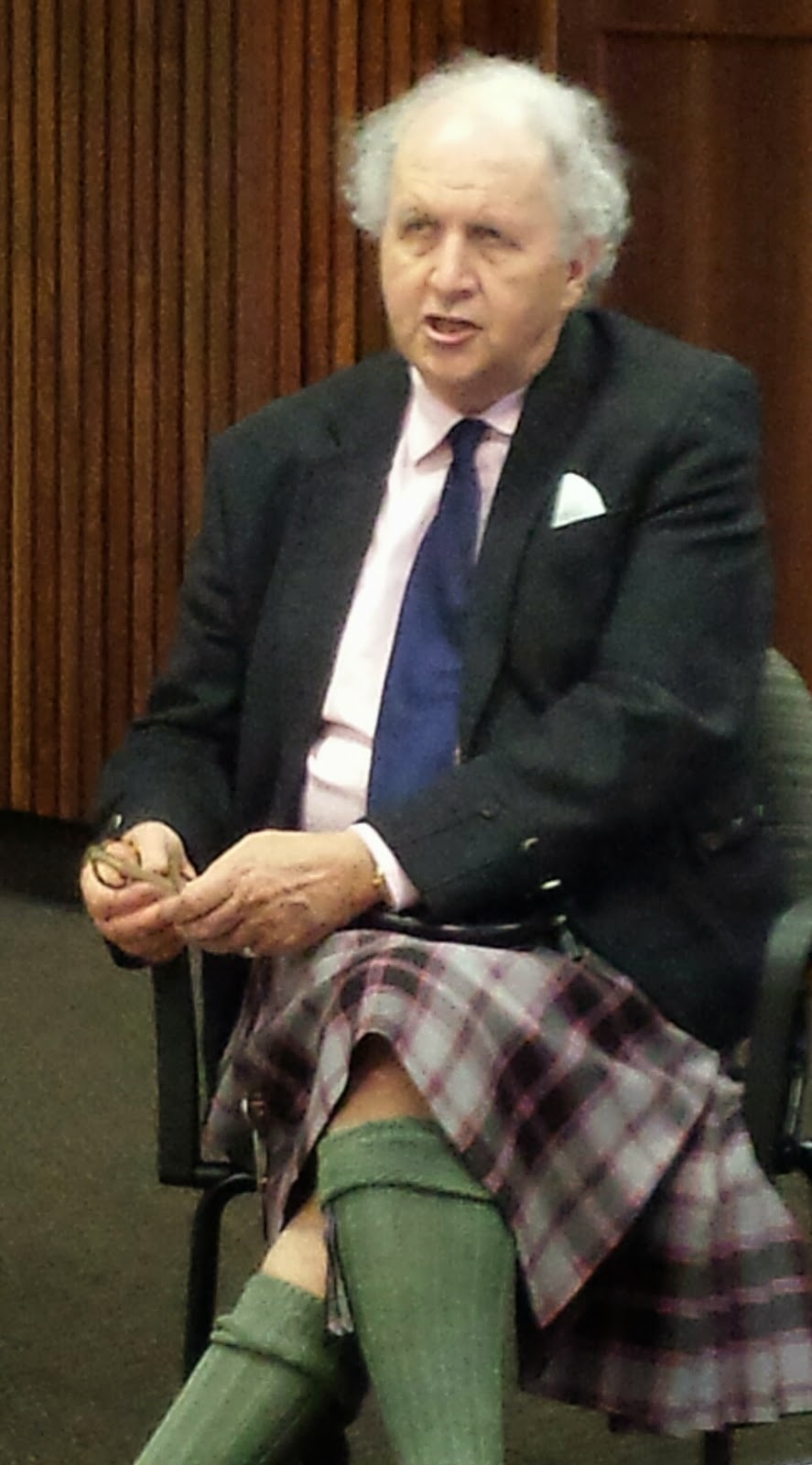 I adore a man in a kilt and when that man happens to be Alexander McCall Smith, well, then I swoon.

And swoon I did last Thursday night when Mr. McCall Smith appeared at the library on the first stop of his book tour for Emma, a modern retelling of the Jane Austen classic. In his version, Emma Woodhouse is an interior designer who has returned home to her village of Highbury. What goes on from there I won't be able to tell you until I read my Autographed Copy.

Mr. McCall Smith has created such wonderful characters. I am a fan especially of his No. 1 Ladies' Detective Agency books (there are fifteen so far and another one due out in October). He also writes of Isabel Dalhousie, the 5-year-old Bertie and other residents of 44 Scotland Street, and has written stand alone novels as well.

In Which I Crash the Party

I arrived at the library an hour before AMS was scheduled to speak so as to get a front row seat (which I did). I had just settled in when a woman who works at the library and knows I am a fan told me of a private tea-and-crumpets reception that was being held in his honor in the lower level conference room. I decided the only thing to do was to crash the party. I determined I could flash my well-used library card and gain admittance.

I needn't have worried. I thought perhaps there would be a room full of people all standing around holding teacups. I was wrong. There were maybe thirty people in attendance most of them sitting at the long conference table. I swanned in just like I belonged there and immediately spotted AMS. After all, it is rather difficult to miss a man wearing a kilt. He was standing to one side surrounded by a few women. I walked up to the group and in a few seconds he turned to acknowledge me and I introduced myself as a writer from a local woman's lifestyle magazine (which I am) and told him how we were thrilled with his strong, independent female characters (which we are).

After that I never left his side.

People would come over to speak with him. I would take pictures for them and then AMS and I would have a few minutes of private conversation before another couple of people came over to meet him. More photos. I think they all thought perhaps I was his handler or aide-de-camp.


At one point I found myself holding his reading glasses, his glass of Diet Coke, and the book he was clutching while someone took a group picture.

I admit that I gushingly told him that I never in my life thought I would have the chance to meet him and how thankful I was that he came to Louisville. He was perfectly gracious.

Not a single person questioned my presence. It just goes to prove that if you act as if you belong somewhere, well, then you do.

In Which Mr. McCall Smith Speaks 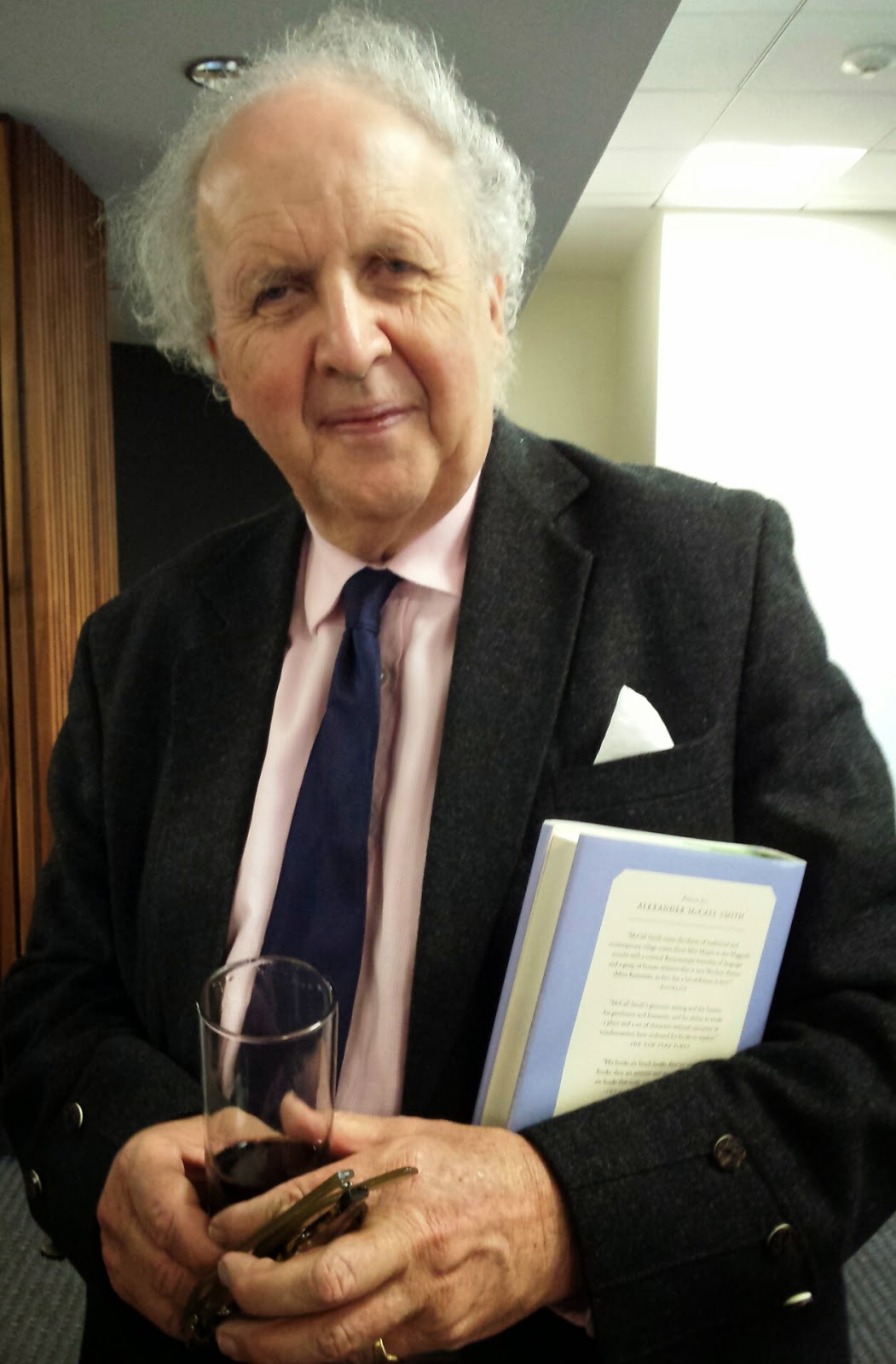 His presentation to the audience of well over 300 people was as delightful as expected. He was so comfortable on stage and told story after story about his characters and his writing adventures and his creation of The Really Terrible Orchestra in Edinburgh.

He ended with a particularly hilarious story about a botched car rental reservation at the Pisa airport and how that resulted in his rental of a bulldozer and his slow drive to Sienna. Along the way, he said, because he was traveling at such a slow rate of speed he really got to enjoy the scenery. And if there was a hill or fence that he didn't like the looks of, well he was driving just the vehicle to eliminate it.

We were all laughing so hard and he got tickled too and laughed along with us. His eyes just sparkled.


After his presentation, he took questions from the audience. I asked if he remembered learning to read and what books were on his family's shelves when he was growing up. He paused. He hadn't been asked that one before, he said. He recalled a book called Ginger's Adventures that was his favorite. It was the story of a farm boy, Tommy, and his dog, Ginger. Ginger somehow ends up as a girl's pet living unhappily in London with ribbons in his hair but eventually makes it back to the farm where he and Tommy get to roll in the mud and do what boys and dogs do.


An aside: I looked up the book and sure enough, it was published by Ladybird Books in England in 1940 and was illustrated by A.J. McGregor and the story written in verse by W. Perring. I don't see that it is available here in the United States but Amazon UK does have copies for sale.

I was second in line to get his autograph in my newly purchased copy of Emma. By then I felt as if we were old friends. I also brought with me my hardcover copy of The No. 1 Ladies' Detective Agency which he kindly autographed as well.

It was a wonderful, unforgettable evening. Eventually the video of his presentation will show up on the library's website. I will embed the link when it does so that you all can enjoy his appearance as well. 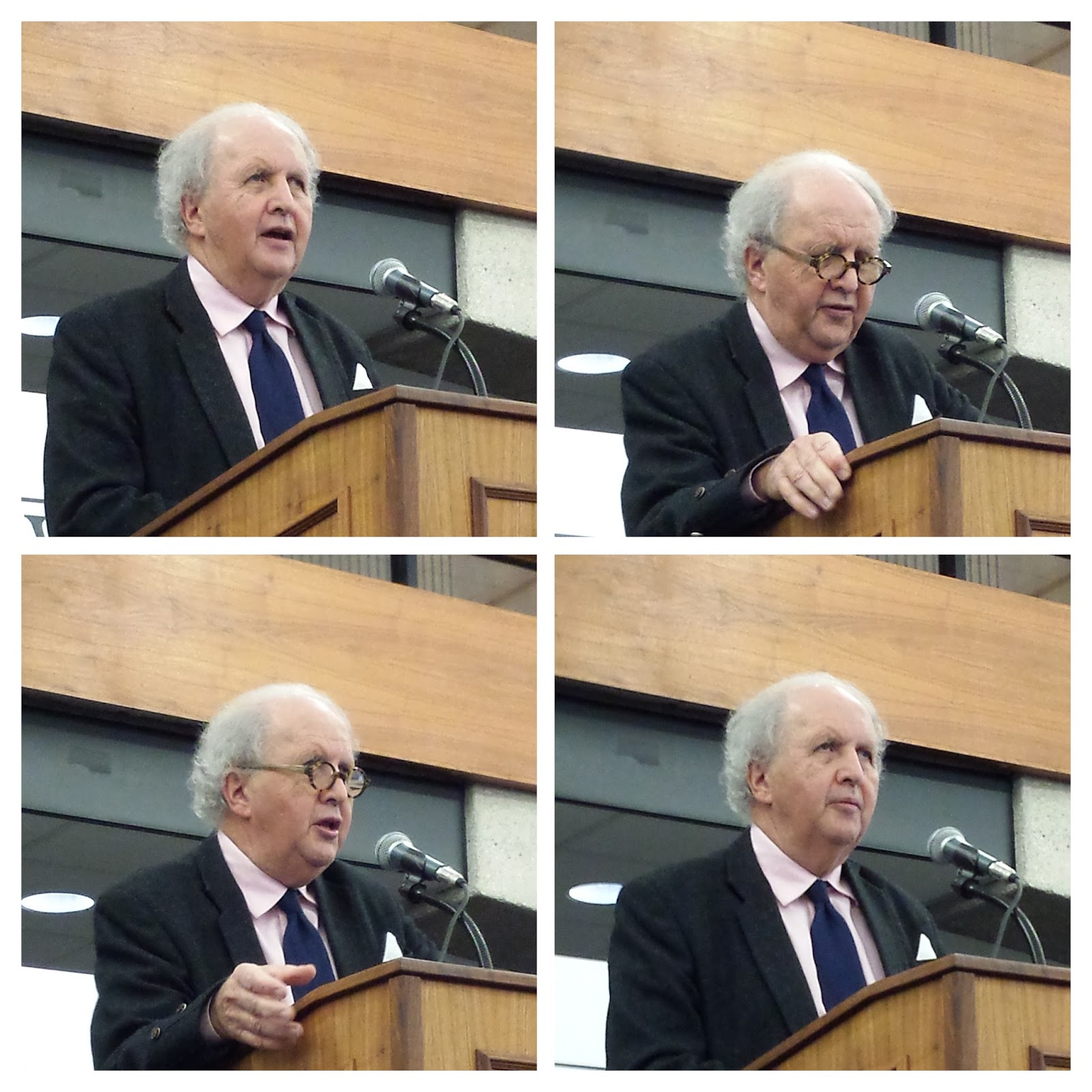