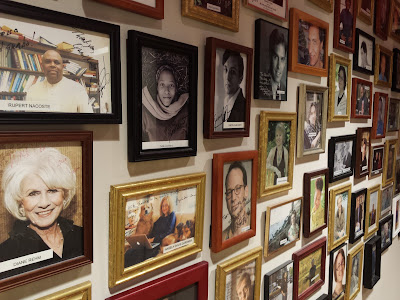 This Christmas I gave myself a splendid gift - a Bookstore Quest.

A little guidance was needed.

Well, due to the alignment of the stars and the generosity of author James Patterson, I was able to map out my route.

How did Mr. Patterson figure into my quest? He gave $250,000 in holiday bonus grants this year to 149 employees of independent bookstores. I came across the list of winners and four employees from three bookstores in the vicinity were on it. I thought it was the perfect criterion for my expedition. 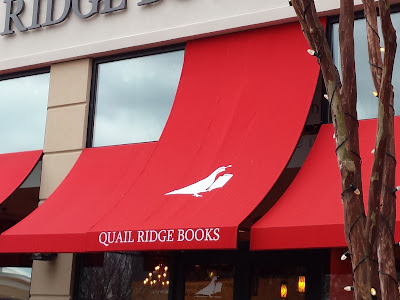 First stop was Quail Ridge Books in Raleigh. It sits in a corner space of an upscale shopping center. The store actually boasted two grantees but neither was working the day of my visit. I browsed the regional author section and came upon You Can't Drink All Day If You Don't Start in the Morning. This collection of syndicated newspaper columns by Celia Rivenbark who lives in Wilmington, North Carolina seemed to be a cross between Dave Barry and Erma Bombeck. I decided it would be the perfect gift for a friend. I hope these essays prove to be as humorous - and snarky, we love snarky - as the bookseller Samantha assured me they were.

The image at the top of the page is the photo gallery of authors displayed in the women's restroom at Quail Ridge Books. 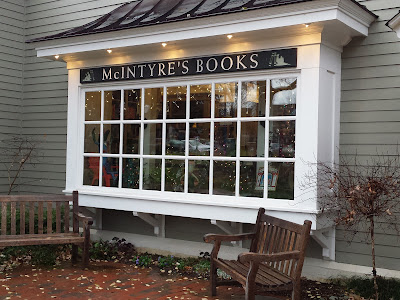 Next stop was Fearrington Village just south of Durham in Pittsboro. This is a planned community of shops, homes, an inn (very pricey), restaurants, and my destination: McIntyre's Books.

I met Peter Mock who was the store's grant recipient. When I asked him to recommend a book of essays, he enthusiastically led me to The Animal Dialogues by Craig Childs and I handed him my credit card.

We spent a lot of time in the mystery book room which is Peter's pride and joy. Peter is book buyer and mystery guru and has been with the store 22 years. When he first started with the shop, he said, mysteries took up two shelving areas. Now they have a room of their own - which is as it should be. I loved it. 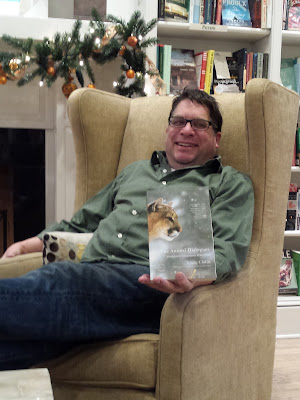 By then it was late and raining and I returned to the hotel for the night. Next morning, I was on the road to Chapel Hill and Flyleaf Books. With its orange walls and location in a small shopping center, it was the funkiest of the three. It sold both used and new books. 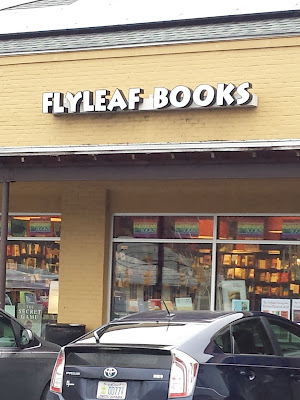 Here's the story from Flyleaf:  At the first two stores on my quest, I had seen a book on display on the new quality paperback tables. It looked like my cup of tea and I had in mind that I would buy it from Flyleaf Books as I had already bought a book from each of the other stores. I wanted to spread the wealth.

I looked on all the display tables but didn't see it. I approached the desk and tentatively said, "I am your nightmare customer. I don't know the name of the book or the author, but the cover is blue and it is a book of stories about a small English village in the 1930s. It's new. Can you help?"

A search on the computer came up with title and author (Notwithstanding by Louis de Berniers). It showed one copy in the store located on display table number eight. We looked there. No luck. We looked on the shelves. No luck. I was determined and went back to Table Eight thinking maybe it had gotten mixed in with other 'blue books.'

Well, just to prove that once a bookseller always a bookseller, I found it. Victory! Sure enough, it had another book stacked on top of it. I was so proud and the employees who had been helping me gathered round to touch the hem of my coat. Well, not really, but they were impressed at my diligence in sniffing out its location.

I chatted with manager Lane Jacobson and congratulated him on his grant. Asked what he was going to do with the money, he said, "I donated some and used some to pay off student debt." (I mistakenly heard 'student death' which we agreed was a more fitting description.)

Lane has been with Flyleaf Books for four years. One of his favorite authors is David Mitchell (Cloud Atlas) and he just finished reading The Amazing Adventures of Kavalier and Clay by Michael Chabon. On his TBR list are City of Thieves by David Benioff and Moonglow by Michael Chabon.

I ended up buying two used books and the 'blue book'. 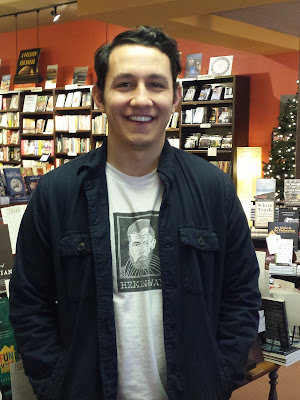 Thus my quest came to an end. It was quite satisfying and as I had all the books I purchased gift wrapped, I brought home not only a delightful holiday memory but a few goodies for under my tree as well.

I know this is a longer letter than usual, but one can't possibly cut short the story of a quest.

Wishing you a safe and prosperous 2017.
Read On! 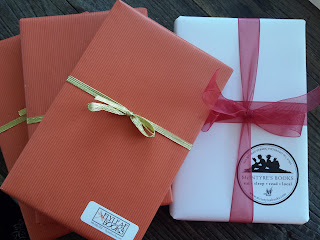