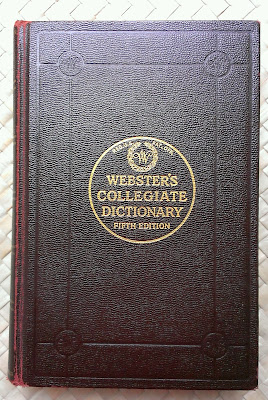 This is the dictionary that we used when my grandparents and I played Scrabble. I was quite young and they were kind enough to let me look up words before I made a play. I still have their original Scrabble game with its real wood letter tiles. In the box are the scores recorded from some of those early games written in my grandfather's hand. As a civil engineer, he was the one good at math and we trusted his addition skills.

Webster's Collegiate Dictionary, Fifth Edition has a copyright date of 1947. The cover is dark brown with decorative embossing and the title is stamped in gold. The letters are thumb-indexed and a black-and-white portrait of Mr. Noah Webster graces page one. It was printed by H.G. Houghton and Company, Electrotypers, Printers, and Binders in Cambridge, Massachusetts. It is based on Webster's New International Dictionary, Second Edition, copyright 1934. 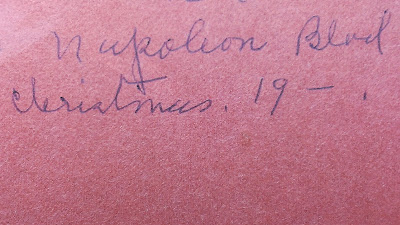 My grandfather wrote his name in pencil on the inside cover. Underneath that, in pen, my grandmother had written his full name, their address, and noted Christmas, 19--. I wonder why she didn't know the year that it was given as a gift? Perhaps she wrote this entry after my grandfather died and couldn't remember the date but wanted to make note of the circumstances.

Weighing in at 1276 pages, this is a hefty book of words. It contains 1800 illustrations, a listing of Colleges and Universities, a biographical dictionary, and a pronouncing gazetteer. So in case you should ever want to untangle the pronunciation of Tsinling Shan, a mountain range in China, this is your book. 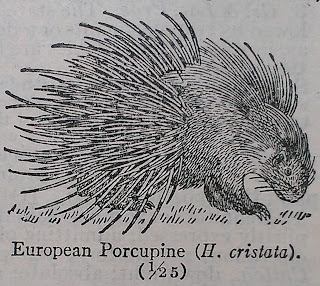 I love the dictionary's illustration of this little fellow.

There is a list of Common English Christian Names - both men's and women's. And who could do without the section on Foreign Words and Phrases including Proverbs, Colloquial Expressions, and the Mottoes of the States and Leading Nations.

And here is something a bit outdated: a section titled Preparation of Copy for the Press advising that your "Manuscript should be kept and mailed flat. If necessary, it may be folded, but it should never by rolled." The editors have kindly included an explanation of proofreading marks and have used them to correct a proof of Lincoln's Gettysburg Address. 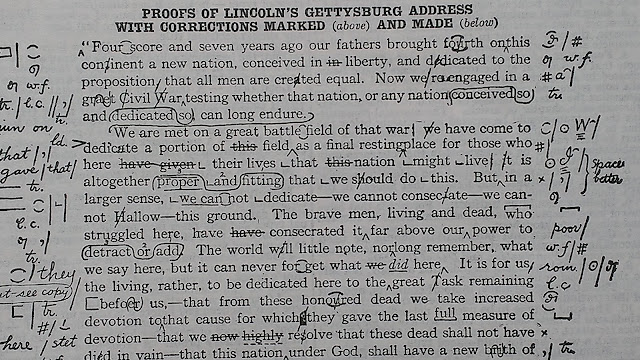 In the Preface, the dictionary user is told that Lowland Scottish terms, which formed a separate glossary in the previous edition of the Collegiate, have in this book been made an integral part of the general vocabulary. The selections of these terms, based on their use by such authors as Burns and Scott, has been made under the supervision of the Editor in Chief.

Remember, this was back in the day when Robert Burns and Sir Walter Scott would have been household names. No need to identify them by first name!

I wrote about three other of the seven dictionaries that sit on my shelves here and here. Getting to know my word companions and writing about them is proving to be quite a nostalgic project. 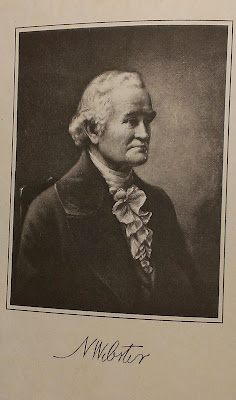