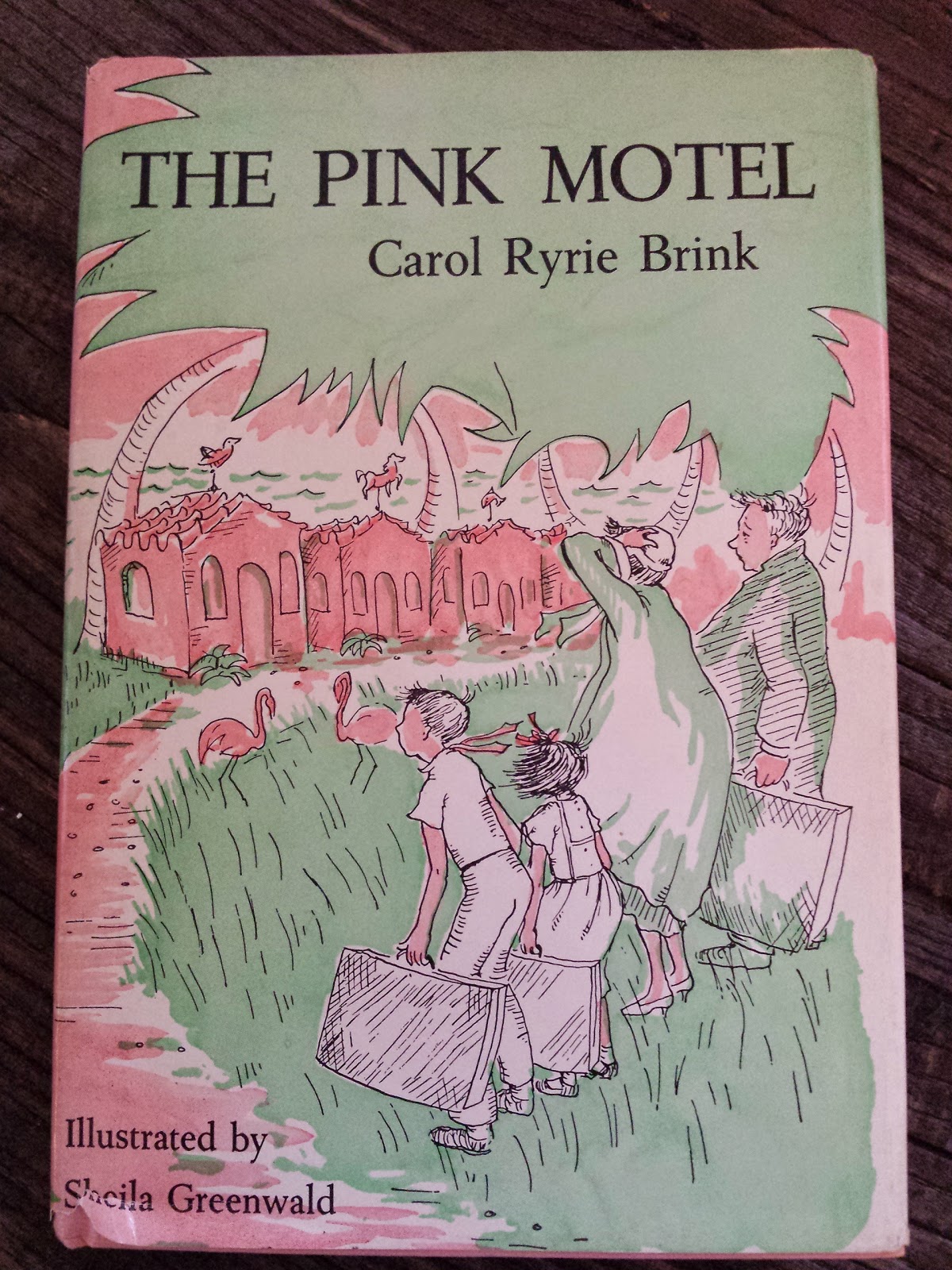 It is only May and I already have my Book of the Year! It is a vintage copy I was delighted to discover on the sale table at the library: The Pink Motel written by Carol Ryrie Brink and
published in 1959.

You may be familiar with Ms. Brink as the author of the 1936 Newbery Medal winner Caddie Woodlawn.

The Pink Motel is one of those old-time, individual small cabin motels that used to dot the American landscape. This one is on the beach in Florida (before monster hotels and condominiums took over) and has been left by Uncle Hiram to his great-grand-niece and her family. Mr. and Mrs. Mellen, 10-year-old Kirby and 9-year-old Bitsy, live in Minnesota. They leave the cold and snow and fly to Florida over the children's winter school break with the thought of selling the motel. But the warm winds and soothing surf begin to work their magic on the children as well as their parents.

The kids have adventures. They make new friends their own age and meet the regular winter guests: an artist who seems to have a few witchy-like powers; a magician whose magic seems to have disappeared; the woodcarver who crafted the weather vanes atop each cabin; and, two shady characters that Kirby, who proudly wears his Junior G-Man badge, is sure are gangsters. They investigate a mystery. They put on a talent show.

There are no vampires. No one has a deadly disease. There is no sex or violence.

It is all great fun. Ms. Brink captures the sounds and tastes and sights of this cozy spot by the sea. The weather vanes on top of the cabins flap in the breeze, the palm tree leaves rattle in the wind, the waves whoosh against the shore, the sky is colored a bright Southern blue, and the taste of fresh coconut lingers in the mouth. There are also entrancing illustrations by Sheila Greenwald which add to the charm of the tale.

One of my favorite parts of the story concerns the messy desk in Uncle Hiram's office that Kirby gets to investigate. 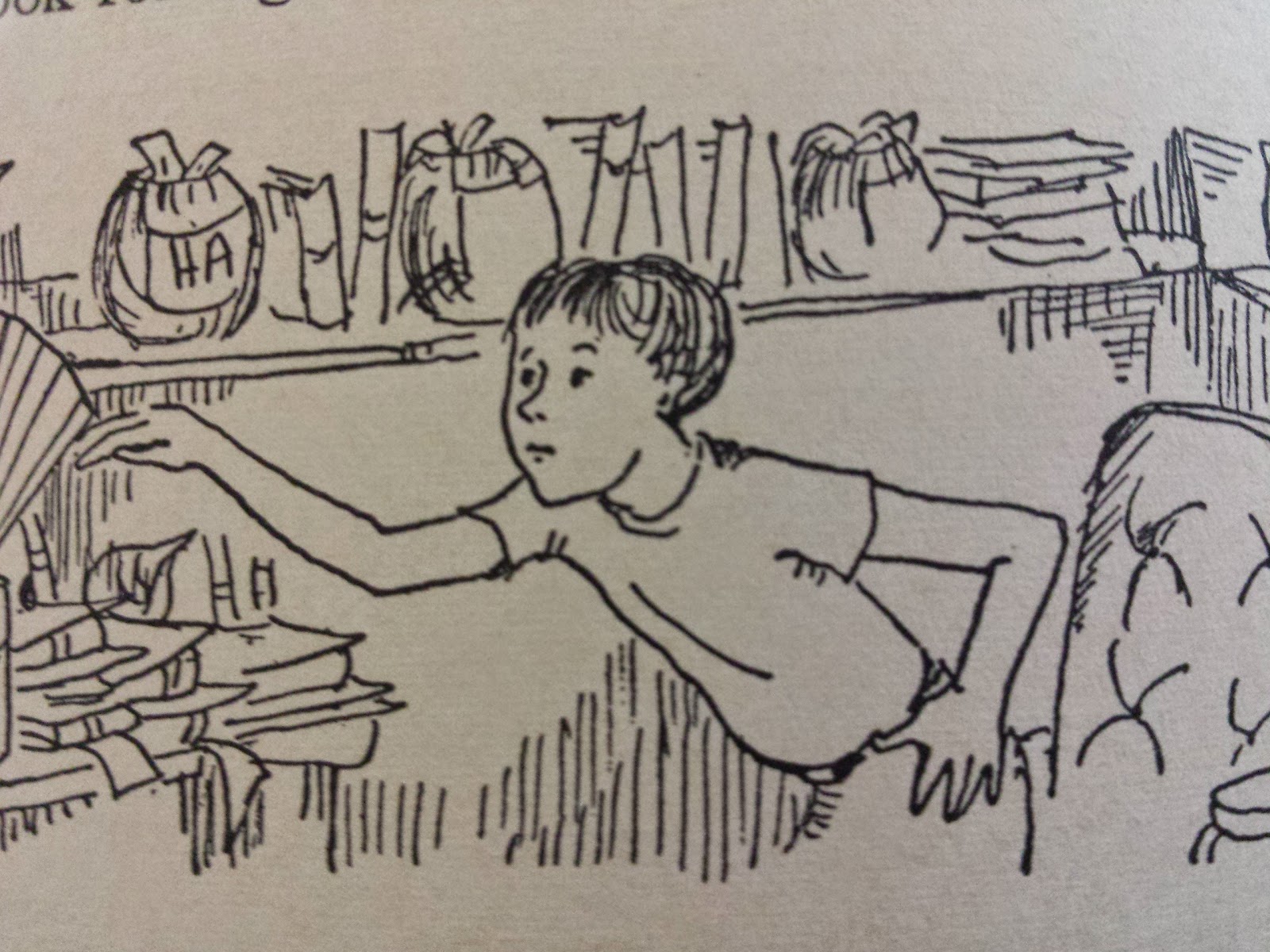 No one had made any attempt to tidy it. The roll-top desk was bulging with papers and shells and old books and fishing reels, and many other things. Nothing seemed to be valuable. A shelf ran around the wall, and on it were a great many coconut shells which were also stuffed with string and fishhooks and small pieces of paper. The bits of paper were of many colors, but most of them were pink. Kirby suspected that the coconut shells, like the filing cabinet in his father's office up north, kept Uncle Hiram's business secrets and personal treasures. The only difference was that Father's filing cabinet was so neat that it was quite uninteresting, whereas Uncle Hiram's coconut shells were full of mystery and promise.

Don't you wish you could go on a treasure hunt through Uncle Hiram's desk? I sure do.
Posted by Belle at 11:52 AM