The Middle of Things by J.S. Fletcher and A Tribute to Muhammad Ali 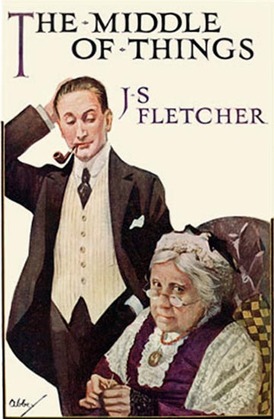 I am in the middle of reading The Middle of Things which seems to be a perfect place to stop and share with you what I know about this mystery novel and its author.

The Middle of Things was written by J.S. Fletcher (1863-1935) and first published in 1922. Wikipedia's profile on Mr. Fletcher notes that he wrote 230 books of fiction and nonfiction. He started out as a journalist, moved on to writing poetry and historical fiction, and then settled down in 1914 and wrote what was to be the first of over 100 mystery novels. He was one of the leading writers of detective fiction in The Golden Age.

This tale begins in the library of the London home of Richard Viner ("a young gentleman of means and leisure") and his aunt Miss Bethia Penkridge. She is a notable fan of mystery fiction. Their evening's entertainment usually consists of her nephew reading aloud three chapters from the latest mystery novel.

What she loved was a story which began with crime and ended with a detection - a story which kept you wondering who did it, how it was done, and when the doing was going to be laid bare to the light of day. Nothing pleased her better than to go to bed with a brain titivated with the mysteries of the last three chapters; nothing gave  her such infinite delight as to find, when the final pages were turned, that all her own theories were wrong, and that the real criminal was somebody quite other than the person she had fancied.

Viner gently scoffs at his aunt's taste in the sensational and questions if such books are relevant to real life. She assures him that real-life mysteries abound. Sure enough, he soon finds himself in the middle of one when later that evening he goes out for a stroll and comes across the dead body of a man in the dark passage off Markendale Square.

The chase is on from there and clues and leads and more mysteries follow one behind the other. Quite fun.

I must say that I am delighted to have discovered Mr. Fletcher. His writing is clean and crisp with a soupçon of humor. He doesn't rehash and belabor clues (as some mystery writers tend to do) and the action moves along briskly.

One odd thing is his naming of characters. Consider monikers such as Portlethwaite, Methley, Woodlesford, Perkwite, Felpham, and Millington-Baywater. Those don't exactly roll easily off the tongue.

My library has eight more of Mr. Fletcher's detective stories in its ebook collection so I have many tales to look forward to.

And that is what I am in the middle of. How about you? 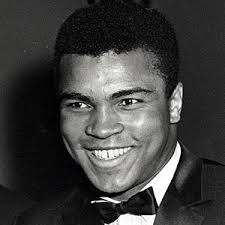 Today the world came to my hometown of Louisville -  a hometown that I share with Muhammad Ali who died last week at the age of 74.

His funeral procession through the streets of the city and his memorial service today attracted thousands of people from all over who came to say farewell to this Olympic gold medal winner, three-time heavyweight world boxing champion, activist, and humanitarian.

Ali was brash and beautiful, controversial and captivating, impassioned and inspiring.   He was known as The Louisville Lip for his predictions, pronouncements, and outrageous poetry. He had a way with words and a way with people. He had a big smile and an even bigger heart.

Because of the Louisville connection, Ali was someone I was always aware of. I knew about The Champ's many victories in the ring and his accomplishments after he hung up the boxing gloves. I am heartened - and truth be told, quite overwhelmed - to see the outpouring of affection and respect that has been shown him this past week. He was quite a remarkable man who will be remembered for much more than just his knockout punch.
Posted by Belle at 10:35 PM