A Skeptic's Guide to Writers' Houses by Anne Trubek 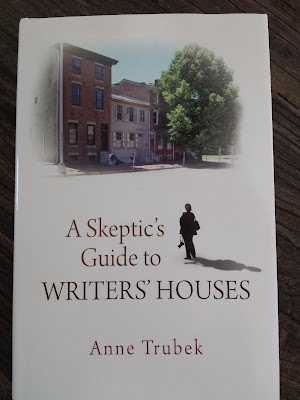 I am on another armchair traveling adventure. This time I am visiting writers’ houses, a favorite pastime. The book I am reading is titled The Skeptic’s Guide to Writers’ Houses and yet I am not skeptical in the least about my journey.

The author, Anne Trubek, is somewhat suspicious of the motives people have in visiting writers’ houses and museums. She seems to think that the literary pilgrim is hoping to acquire a dash of the writer’s genius or to brush up against the writer’s fictional characters.


Going to a writer's house is a fool's errand. We will never find our favorite characters or admired techniques within these houses; we can't join Huck on the raft or experience Faulkner's stream of consciousness. We can only walk through empty rooms full of pitchers and paintings and stoves.


Not the best attitude to have as she sets out to discover for herself the allure of the writers’ houses across America from the homes of Alcott, Emerson, Hawthorne, and Thoreau in Concord, Massachusetts to the Jack London State Historic Park in Glen Ellen, California. Along the way she stows away her doubts and actually begins to enjoy herself.

I am a great fan of visiting writers’ homes, birthplaces, and even graves and have written here of those that I have visited. And no, I don’t think the writer’s genius will rub off on me (Oh, but wouldn’t that be lovely!), but I go for the history and just to get a peek at the bookshelves. (If you would care to read about any of my adventures, click on the 2012 and 2013 Grand Southern Literary Tour tabs above.)

Of the dozen or so literary sites that Ms. Trubek visits, I have been to three. There is Samuel Clemens’s hometown of Hannibal, Missouri - the entire town pays homage not so much to the author but to his creations Tom Sawyer and Huckleberry Finn. Then there is The Manse in Concord that was lived in by Emerson and later Nathaniel Hawthorne and his wife Sophia Peabody. Finally, there is the Thomas Wolfe house in downtown Asheville, North Carolina, which she so rightly states is being swallowed up by more and more commercial development.

I still have Hemingway’s homes in Key West and Ketchum, Idaho to look forward to visiting, via Ms. Trubek, along with an Edgar Allan Poe house in the Bronx and Walt Whitman’s home in Camden, New Jersey.

It is amusing to read her reactions not only to the houses and their oftentimes faux furnishings but also the docents’ patter and the comments and questions of other visitors. Her musings range from thoughtful to scholarly to often witty and snarky. I liked them all.

The book has been on my bookshelf for many years. I remember now that I ordered it, pre-Amazon, from the Edward R. Hamilton Bookseller catalog. I am glad that I finally picked it up to read.

What literary pilgrimages have you made? Did you get your money’s worth or were you left feeling as if you had come upon an empty shelf?
Posted by Belle at 10:27 PM