White Sands: Experiences from the Outside World by Geoff Dyer 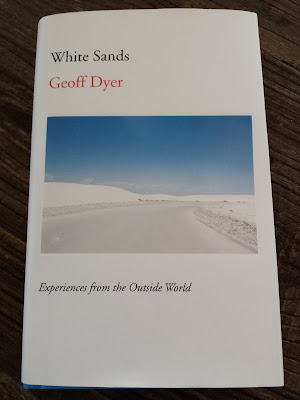 I like to travel. I like to read books about travel. I want to share another's experiences in foreign places, especially locations that I will likely never get to. It is, as they say, a Wide, Wide World and taking a journey from the comfort of my reading chair without the hassle of luggage, noisy hotel rooms, and trying to decide where to eat lunch is much less stressful.

My latest armchair adventure has been with author Geoff Dyer. He was just this week a guest at the library for another terrific author event. His book, White Sands: Experiences from the Outside World, was released earlier this month so his appearance in Louisville was one of the first stops on his book tour. Lucky us.

First of all, this book of nine tales is unlike many travel adventures that you might have read. The author states quite plainly that the stories are a mixture of fiction and non-fiction which makes the twists and turns more exciting as there is always a bit of mystery...did this really happen or not?


For instance, in the titular piece, he and his wife (name changed from the real Rebecca to the made-up Jessica) are driving near White Sands National Park in New Mexico and stop to pick up a hitchhiker. All is well, until within minutes the car passes a sign:


WARNING
Do Not Pick Up Hitchhikers
Detention Facilities in Area

What happens from there includes much neurotic thinking (I laughed because I could follow every little byway of his fevered brain) and is as spooky as a Twilight Zone episode.

Mr. Dyer read this chapter as part of his presentation but never did let us know how much of the event was real. Maybe all of it or maybe part was just a figment of his imagination.

It doesn't matter. The writing is excellent and entertaining and funny in a snarky sort of way. I couldn't wait to get home and read more.

So far I have traveled with Mr. Dyer to The Forbidden City in Beijing where he has a mild flirtation with a non-guide tour guide; to Tahiti in search of a Gauguin experience; and, to The Lightning Field, an art installation in the American desert.

I had him autograph my hardcover copy of his book. He didn't seem to be in any hurry and we had a brief intense chat. He is British (and charming of course). I asked him what writers had influenced him or that he continued to read and he answered: John Berger, Annie Dillard, and Rebecca West.

He especially recommended Ms. West's Black Lamb and Grey Falcon, her 1200-page classic about Yugoslavia and the Balkans. He promised that if I read the first thousand pages and wanted to give it up to let him know and he would refund my money. (I told you he was charming.) Ms. West was one of the Dead Ladies in Jessa Crispin's book that I wrote about here.

As to Annie Dillard, Mr. Dyer wrote the preface to her collection of essays In Abundance (here) and also includes a quote from her in the front of his book:


The point of going somewhere...is not to see the most spectacular anything. It is simply to see what is there. We are here on the planet only once, and might as well get a feel for the place.