Wednesday night I splashed my way through a summer storm to attend another terrific author event at the library. This time it was a presentation by Hemingway scholar and English professor Mark Cirino.

He is one of three authors who have put together Hidden Hemingway: Inside the Hemingway Archives at Oak Park.  The book includes some 300 images of letters, photos, notebooks, school assignments, receipts, and even a slightly gross dental x-ray. By all accounts, Ernest Hemingway, a Pulitzer Prize- and Nobel Prize-winning author, was a pack rat.

Oak Park, a suburb of Chicago and where Hemingway was born and grew up, is home to The Ernest Hemingway Foundation of Oak Park where the archives containing these items are held. Oddly enough, although Hemingway lived and wrote about places all over the world - France, Spain, Cuba, Italy, Switzerland - he never wrote about his hometown, Mr. Cirino said.

Hemingway had a weird childhood. His mother dressed him as a girl. She held back his older sister and sent them off to begin school together and introduced them as twins. After living an out-sized masculine life full of bullfights, wars, women, drinking, and big game hunting, in his final years Hemingway ended up in the Mayo Clinic paranoid and depressed and subject to electroshock treatments. He committed suicide in 1961 just days before his 62nd birthday.

He didn't get a happy ending. 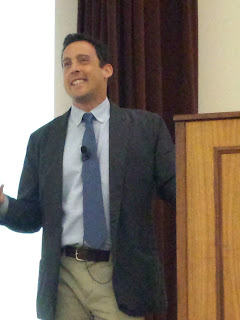 Mr. Cirino was a delightful presenter. He showed photos of the young and very handsome Hemingway, letters, and the aforesaid dental x-ray. But mostly he was interested in Hemingway the writer. He contends that Hemingway created a new language about war - reporting objective facts rather than the false romance of  'sacred, glorious, and sacrifice'. His writing offers the touchstone of omission and restraint, describing action and scenes but leaving the emotions they create up to the reader.

After his presentation, Mr. Cirino fielded questions from the crowd. There were many inquiries as to Hemingway's psychological and sexual characteristics which Mr. Cirino declined in the kindest way to speculate on. "I am a literature professor, not a psychiatrist."

There seems to be a resurgence of interest in Ernest Miller Hemingway. Two books worth attention might be Everyone Behaves Badly: The True Story Behind Hemingway's Masterpiece The Sun Also Rises by Lesley M.M. Blume and Writing With Hemingway: A Writer's Exercise Book by Cathy MacHold.

My favorite Hemingway book is and will remain A Movable Feast.


"If you are lucky enough to have lived in Paris as a young man,
then wherever you go for the rest of your life, it stays with you,
for Paris is a movable feast."


This is my 900th post to Belle, Book, and Candle. I didn't think when I started that I would have so many words in me about books and bookish things! Thanks to all of you who have joined me here. I feel the warmth of your friendship. ---Belle
Posted by Belle at 10:40 PM