Bits and Bobs Left Behind 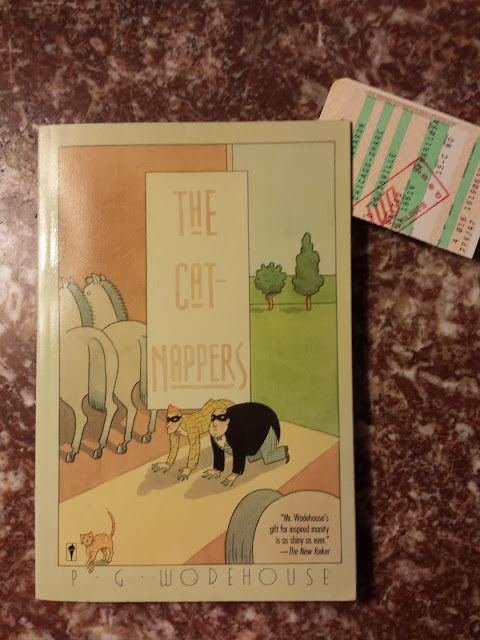 Things left behind in used books can be irritating or entertaining. Reader notes scribbled in the margins and underlined passages often contribute to the 'irritating' label in my opinion.

On the other hand, in the entertaining realm are the bits and bobs and other ephemera abandoned by previous readers. Items I have found include credit card receipts, business cards, actual bookmarks (always welcome), newspaper articles, dried flowers, and in the following case, quite a surprise.

At the Locust Grove Used Book Sale in March 2015, I paid a hefty one dollar for a paperback edition of P.G.Wodehouse's The Cat-Nappers. This is a tale of Bertie Wooster's attempt to get away from London for a quiet visit to the country but, because this is Wodehouse, his stay becomes just the opposite. It is the last novel featuring Jeeves and Wooster - one character with the brains and one with an uncanny way of getting caught up in delightful dilemmas.

Anyway, during a recent bout with insomnia, I pulled The Cat-Nappers from a stack on the bookshelf - you can see right away how far behind I am with my TBR pile - and settled in to immerse myself in the wonderful world of Bertie Wooster and his faithful valet. Nothing like a little laughter to raise one's spirits at 3 o'clock in the morning. Before I opened to the first page, I casually flipped through the book and a small piece of paper fell into my lap.

It was the stub from an United Airline boarding pass. When I read the name of the person on the ticket I discovered it was someone I knew. I was not close friends with this woman but we had met quite a few times and had several mutual acquaintances. She was from a prominent family in Louisville and contributed much to the community. She died in late 2013. I guess that is how her book came to be in the used book sale a year and a half later.

I studied the stub further. Her flight was from Chicago/O'Hare to Louisville and the date of the flight was March 27 - my birthday! Although there was no year noted, I did some investigating and discovered that the United logo printed on the stub was in use from 1974-1993.

Her seat was in the non-smoking section and more detective work revealed that the airlines went totally non-smoking on short flights in 1990. This narrowed even further the possible year of her flight. As the edition of The Cat-Nappers in hand had a publication date of 1975, I could only deduce that the flight took place between then and 1990.

Sherlock Holmes has nothing on me.

Of course, all this is just an amusing - to me - anecdote of what surprises books can hold in addition to the stories printed in their pages.

Have you discovered any interesting items between the pages of your books? Or perhaps you have inadvertently left something of your own behind for the next owner to discover. Please, do tell.
Posted by Belle at 10:20 PM