Maigret and the Millionaires 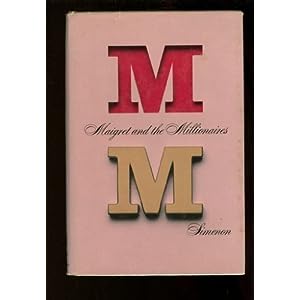 The naked body of multimillion-aire Colonel Ward has been found in the bathtub of his suite at the ritzy Hotel George V. The next day, his lover, the Countess Paverini disappears from the hospital after trying to commit suicide.

Inspector Maigret doesn't like that he feels a little out of his element in Maigret and the Millionaires. The case will take him from the streets of Paris to the hotels and casinos of Monte Carlo to Lausanne, Switzerland and back to the elegant Paris hotel.

Maigret seeks answers in the back halls of the exclusive hotel. He spends a restless night of pacing and questioning and much sitting and thinking with pipe in hand before he determines the murderer and sets his trap to ensnare the guilty one.

This is a lovely mystery (if murder can be lovely) written in 1958 by Georges Simenon. It has been quite a while since Maigret and I crossed paths and I am glad to be back in his company on the streets of Paris. Or anywhere else for that matter.

Simenon writes of Maigret and Paris with such fondness. The mystery is solved in 170 pages and Maigret gets to go home to the apartment on the Boulevard Richard-Lenoir that he shares with his wife, almost always referred to as Madame Maigret.

A satisfying ending to a well-written mystery.
Posted by Belle at 3:42 PM

Email ThisBlogThis!Share to TwitterShare to FacebookShare to Pinterest
Labels: Inspector Maigret, Maigret and the Millionaires, Paris in July