The Early Bird Gets the EBook

It seems as if I am not only a collector of real books, but I now have quite a stockpile of ebooks. Granted, they don't take up any shelf space, but hoarding is hoarding!

Earlier this year I signed up for Early Bird Books, a site that sends me a list of ebooks every weekday that are on offer at discounted prices. There is also one Free Book to be had and I have taken advantage of many of those.

I decided to explore the free titles I have downloaded from that site on my Kindle and was surprised (OK, not really) at the number of books I had shelved but not read.

Here is just a sampling:

Sea and Sardinia by D. H. Lawrence - A recounting of a trip he took in 1921 to the island of Sardinia off the coast of Italy.

The Man Who Knew Too Much by G.K. Chesterton - A series of detective stories. Does anyone remember the movie with Jimmy Stewart and Doris Day?

The Prisoner of Zenda by Anthony Hope - The adventures of an Englishman who takes the place of a kidnapped king to save the fictional country of Ruritania. Has been adapted into many movies.

A Portrait of the Artist as a Young Man by James Joyce - I also have a paperback edition of this one.

Five Children and It by E. Nesbit - I have heard so much about this popular British author that I wanted to read this book. Apparently the It is a somewhat grouchy fairy.

Adam Bede by George Eliot - I have only read Eliot's Middlemarch. Here is another classic for my entertainment.

O Pioneers! by Willa Cather - Of course! I love the opening paragraphs of this book.

Siddhartha by Herman Hesse - I read this when I was in college and remember nothing about it except that it was quite the rage then.

Candide by Voltaire - Oh, well, why not?

I see, now that I have made this list, that it represents quite a variety of genres.  These are all in the public domain and are probably available from many sites online, but it is nice to have titles just show up randomly. I am glad to know I have a wealth of books for the upcoming fall and winter. I feel like a little book-squirrel.

Any suggestions as to where I should begin?
Posted by Belle at 7:33 PM 12 comments:

Email ThisBlogThis!Share to TwitterShare to FacebookShare to Pinterest
Labels: Adam Bede, Brewster's Millions, Candide, Early Bird, Five Children and It, Man Who Knew Too Much, O Pioneers!, Portrait of the Artist, Prisoner of Zenda, Sea and Sardinia, Siddhartha, Sorrows of Young Werther

In Which I Explore Arts and Letters

I spent three days last week in Chattanooga, Tennessee. The city has the distinctive Hunter Museum of American Art which sits overlooking the Tennessee River. The featured exhibit was "Monet and American Impressionism." It was quite well done and I enjoyed seeing the 70-some paintings and prints. I had my sketchbook with me so I was able to make a visual record of my visit there.

Sewanee: The University of the South
Sewanee, Tennessee

On Saturday, I drove about 60 miles west of the city to Sewanee: The University of the South. I have had it in mind to visit the college for sometime as it is supposed to be one of the most beautiful campuses in America. I was not disappointed.

I felt as if I were in Oxford or Cambridge. Soaring Gothic towers, thick stone walls, stained glass windows, and shaded sidewalks greeted me on this quiet afternoon.

I gleaned the following historical information from various sources.

The private, liberal arts college was founded a few years before the start of the Civil War. The goal was to create a Southern university free of Northern influences. The six-ton cornerstone laid in 1860 was blown up by Union soldiers in 1863. This slowed things down for the college that was formed by the ten southern dioceses of the Episcopal Church. It wasn't until 1868 that the first students graduated.

The school publishes the Sewanee Review, founded in 1892, and is thought to be the longest running literary magazine in the country. It also hosts the annual Sewanee Writers' Conference which is funded in part by an endowment from the estate of American playwright Tennessee Williams.

Authors Jill McCorkle, Tim O'Brien, and Alice McDermott are on the faculty of the conference which focuses on fiction, playwriting, and poetry. I missed the conference hubbub by two weeks. It ended August 2. 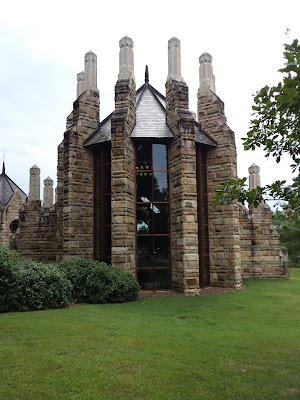 This is the student dining hall. Isn't it fabulous!

The main things I wanted to see were the stained glass windows in the All Saints' Chapel which I read somewhere included images of writers, artists, and musicians. And sure enough, I found huge windows honoring J.S. Bach, Michelangelo, Sir Isaac Newton, and Carolus Linnaeus alongside Shakespeare and Cervantes. There was even one depicting a fellow dressed in what looked to be a brown sports jacket. He turned out to be Gifford Pinchot the first Chief of the United States Forestry Service who served from 1905-1910.

Below are photos I took of the literary honorees. 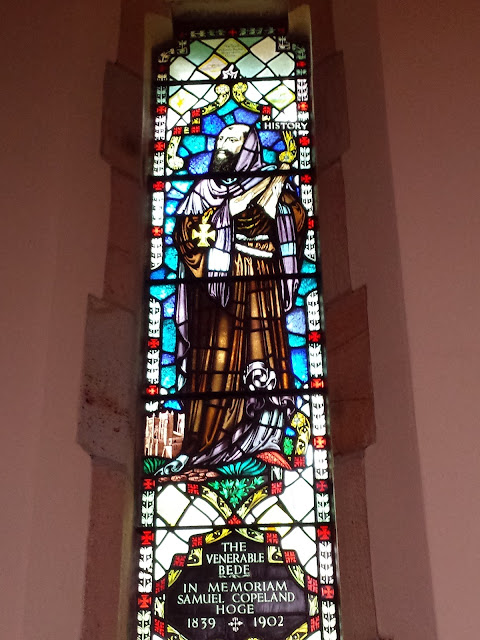 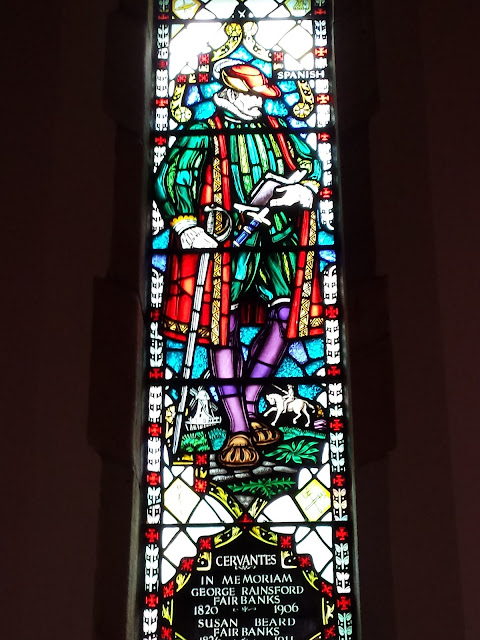 Cervantes
(1547-1616)
Don Quixote
I love the addition of the windmill and knight. 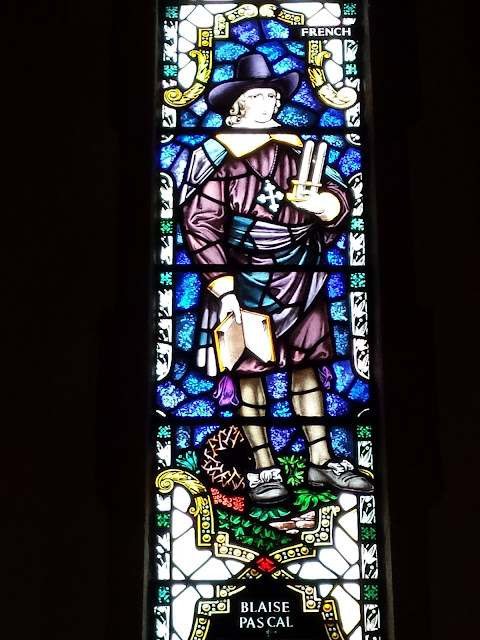 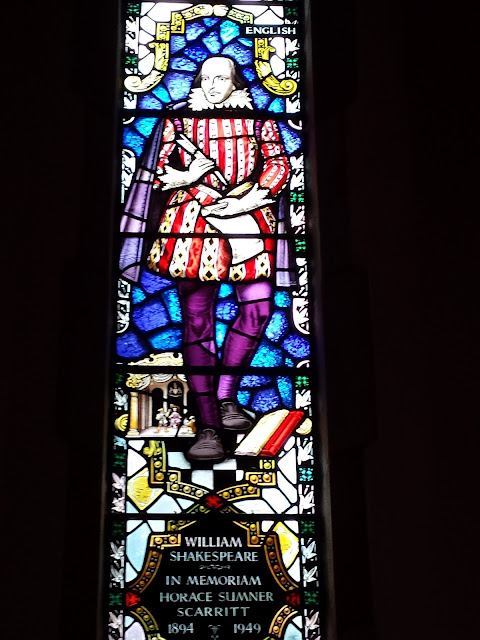 William Shakespeare
(1564-1616)
Can you find the image of the Globe Theatre's stage?

I thought these were wonderful, colorful representations of these writers and I was glad I made the trip to see them.

On a more somber note, the same day I was visiting Sewanee, Vice President Biden and the Secretary of the Navy and the Secretary of Defense were in Chattanooga attending a memorial service for the four Marines and one Navy sailor who were killed just the previous month. I didn't attend, but I did watch some of the speeches on YouTube later that evening. Quite moving.

Chattanooga Strong!
Posted by Belle at 11:16 AM No comments:

Everyone Is Entitled to My Opinion by David Brinkley


Those of you of a certain age will surely remember the nightly news anchors Chet Huntley and David Brinkley. The Huntley-Brinkley Report ran for over two decades on NBC. The two signed off with their signature "Good night, David" "Good night, Chet" for the last time on July 31, 1970.

Chet Huntley reported from New York City while David Brinkley held down the desk in Washington, D.C. After the news program ended with the retirement of Mr. Huntley, Mr. Brinkley continued his career in broadcasting and also wrote four books - two memoirs; a look at Washington, D.C. after World War II; and the one I am reading.

Everyone Is Entitled to My Opinion is a collection of short, one page commentaries he delivered on the Sunday political affairs program This Week With David Brinkley.

I came across this book last summer on one of my travels and am just now getting around to reading it. I am sorry I waited so long. Reading his wry observations written and delivered between 1981 and 1996 on the foibles of politicians and people in general is a reminder that things don't really seem to change.

For example, on January 31, 1982 Mr. Brinkley bemoans the demise of two daily newspapers: The Philadelphia Bulletin and The Washington Star. I can't begin to count the number of newspapers that have ceased to be since then.

On December 12, 1982 he offers simple advice to those who complain they can't get any work done because they are forever being interrupted by phone calls:  If you are busy, don't answer. Of course today we have to contend with much more than ringing phones. (Remember when phones rang instead of singing to us or chirping like a bird?) There are email notifications, text message beeps, and other forms of "Alert! Alert! I am trying to get in touch with you!" interruptions.

He reports on February 5, 1984 that the American national debt was $200 billion and Congress couldn't figure out a way to lower it. Apparently it never has because today our debt is $18 trillion and rising.

He takes on the presidential election year and writes that the Republicans will spend, beginning on March 14, 1983, $100 million on television commercials. All this a year and a half ahead of the November 1984 election. It is estimated that the total television ad spending for the 2016 election will be $4.4 billion.

It's all here from voter fraud to the first mention of the greenhouse effect to the U.S. Navy spending $466 for a pocket wrench that costs $1.49 at the local hardware store to Social Security funding woes and automobile safety recalls.

See what I mean? Same old, same old. Only the dollar amounts are higher.

Well, sometimes it is better to get the news thirty years on. Unfortunately, there is not much nostalgia for "the good old days" to be gleaned from these musings. He writes, though, so very cleverly about these absurdities and that makes for quite entertaining reading. And, I can still hear his distinctive voice in my mind as I read.

These commentaries are not all about The State of The Nation. One funny story is about a teenager who ran away from home and took up residence in an apartment building at the bottom of an elevator shaft. He fixed up a bed and brought in books, magazines, and a hot plate. He might have lived there forever but the tenants kept wondering why the elevator smelled like hot dogs cooking. The boy's nest was discovered and the jig was up.