A Gentleman in Moscow by Amor Towles 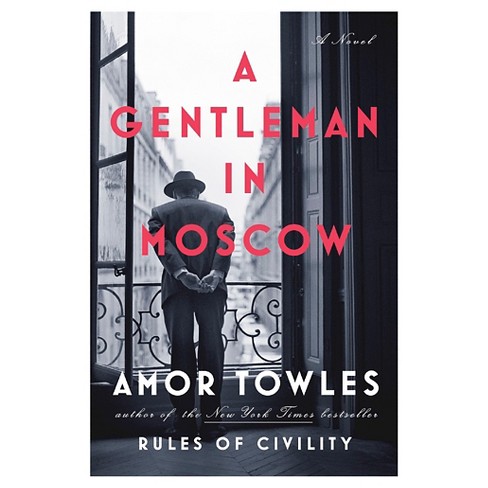 Our story begins in 1922 and spans several decades. Count Alexander Ilyich Rostov has been put under house arrest and is  confined to the elegant Metropol Hotel in Moscow after the Russian Revolution. Scenes of hilarity and heartbreak are interspersed with bits of history, literature, and philosophical musings. I can recommend this as the perfect book to enjoy during the long, cold nights ahead.

Take your time getting to know the Count and his genteel ways. Although his circumstances are not ideal, he continues to behave as an aristocratic gentleman would and finds ways to keep up his spirits. He makes new friends and enjoys visits from old ones. He finds romance. He enjoys champagne, good food, and music. He resorts to a bit of spying and thievery — all to a good end. And he has these adventures without ever leaving the hotel.

A short ABC of a few of the subjects that arise in the course of the Count's days and nights: Architecture; Bees; Catch a loose goose (how to); Dress Balls; Essays of Montaigne, Facial Hair; Gogol; Heroes; Intimacy; Jazz; Kindness; Lessons; Money (hidden); Nutcracker, The; Oranges; Poetry; Quests; Reading; Symphony Orchestras; Time (passage of); Uprisings; Vindication; Weather; Xenophiles; Youth; and, a game the Count devised, Zut.

You get the point. There are many more ideas to keep one turning the pages.

The story also offers a fascinating look at the harshness of communism after the Bolsheviks take over. It's not pretty.

Reading this tale put me in mind of two things. One, this quote from Franz Kafka:

You do not need to leave your room. Remain sitting at your table and listen. Do not even listen, simply wait, be quiet, still and solitary. The world will freely offer itself to you to be unmasked, it has no choice, it will roll in ecstasy at your feet.

The other is the Canadian television series Endgame about a world famous Russian chess player who, traumatized from witnessing the murder of his fiancée just outside their hotel, cannot bring himself to leave the premises. He is brilliant and takes to solving mysteries without ever stepping onto the sidewalk. Endgame only lasted one season, which is a shame as it was witty and kept me guessing.

A Gentleman in Moscow is one of those books that you find intriguing while reading it, and afterwards, looking at it as a whole, you come to fully appreciate its richness and depth.

Since one of my literary sins (here) is not having read any of the Great Russian Novelists, I feel that this story of the Count could count.


Reading Eight Faces at Three by Craig Rice is like being in one of those wonderful romantic comedy movies of the 1930s and '40s. The main characters knock back tumblers of rye whiskey, the women wear furs and silk lounging pajamas (sometimes together), and servants lurk in the scullery.

Craig Rice is the nom de plume of Georgiana Craig. This mystery, published in 1939, is her first.

The book introduces her series' characters John J. Malone, Jake Justus, and heiress Helene Brand. The characters are likable, the dialogue is witty, and the denouement is satisfying.

The mystery begins with bandleader Dick Dayton and Holly Inglehart just married, but before they can begin life together she is arrested for the murder of her wealthy, and vile, Aunt Alexandria. When the police arrive at the stately home, all eight clocks in the house have stopped at 3, Aunt Alexandria's dead body is in a chair in front of her bedroom window open to the snowy night, and Holly is lying unconscious on the floor. Her fingerprints are found on the slender Florentine letter opener from her aunt's desk—now sticking out of her aunt's chest.

Holly proclaims her innocence, but even she wonders if maybe she did kill her aunt in some sort of blackout or sleepwalking incident. After all, the wicked woman was ready to disinherit Holly upon hearing of her marriage. Motive for sure.

They track clues all around Chicago - from bedroom to barroom to brothel. It's all clean fun and the action moves along at a spirited pace.

John J. Malone is as scruffy an attorney as you would ever hope to meet. Here is how Ms. Rice introduces him....

John Joseph Malone did not look like a lawyer. A contractor, or a barkeep, or a baseball manager, perhaps. Something like that. At first sight he was not impressive. He was short, heavy - though not fat - with thinning dark hair and a red, perspiring face that grew more red and more perspiring as he talked. He was an untidy man; the press of his suits usually suggested that he had been sleeping in them, probably on the floor of a taxicab. His ties and collars never became really close friends, often not even acquaintances. Most of the buttons on his vest were undone, and almost invariably he had one shoelace undone.

Disheveled, yes, but in the courtroom he was something to behold and a force not to be reckoned with. He is the one who finally unravels the clues in this caper.

There are 15 books in the Malone series. A shorter series of Ms. Rice's features Bingo and Handsome, a pair of down on their luck business partners just trying to make a buck. She also wrote a few stand-alone mysteries.

I dare you to read Eight Faces at Three and not get a hankering to watch any one of the screwball comedies starring handsome leading men William Powell or Cary Grant.  Two of my favorites: My Man Godfrey and His Girl Friday.