Cast of Characters by Thomas Vinciguerra

When I was growing up I often spent time with a relative who had a subscription to The New Yorker magazine. She had traveled to that metropolis many times and wanted to keep up with what was happening there. I was too young to appreciate anything in the magazine except the cartoons and the colorful covers. I didn't understand what a literary treasure trove it was.

I have come to see the error of my ways. I am especially fond of and fascinated with the early history of The New Yorker when it was lorded over by its founder Harold Ross. The first issue came out in 1925 and Mr. Ross remained the magazine's editor until his death in 1951.

Mr. Ross and his crew - James Thurber, E.B. White, fiction editor Katharine White, theater critic Wolcott Gibbs, and others - are the shining stars in Thomas Vinciguerra's Cast of Characters. I discovered this book in the new non-fiction display at the library the other day and snatched it up. As Mr. Thurber and Mr. White are two of my favorite writers, I couldn't resist.

And it is great to find a book about the magazine that features so much information about Katharine White whose intelligence and clear thinking kept the bombastic Mr. Ross in line. (If you haven't read Onward and Upward in the Garden, a collection of her columns, I can surely recommend that you do.)

I have only read the first two chapters of this tale and am already in thrall of the talent that came together in the editorial offices of the magazine. There is brief background information on each writer and editor and generous examples of their work - which of course is the best part - all held together by Mr. Vinciguerra's fine prose.

I am looking forward to spending the weekend in the company of this erudite, witty, and charming cast of characters.
Posted by Belle at 9:19 PM 8 comments:

The Creative Tarot: A Modern Guide to an Inspired Life by Jessa Crispin


I once went on an undercover writing assignment for a magazine to have my palm read. I sat with the palm reader on her screened-in porch at the back of her unassuming ranch-style house in the middle of a middle class subdivision. She didn't wear strands of amber beads or colorful, fringed, flowing scarves. She also didn't intuit by my palm that I was a writer. Although, to her credit she did tell me that I was some sort of artist living a creative life. She also told me that I was drawn to a solitary, quiet way of living.

In the past, I also had a brief fling with Wicca, more for its focus on nature and the turn of the seasons than on casting spells.

It is not too surprising then that I hold a mild interest in the Tarot, mainly for the little pieces of art that each deck of 76 cards holds.

In The Dead Ladies Project that I wrote about recently (here), the author Jessa Crispin mentions that she occasionally read tarot cards for people to make a little money. So I wasn't totally surprised to find that her latest book is The Creative Tarot: A Modern Guide to an Inspired Life. It was just published and I snagged the library's one copy.

Ms. Crispin uses the tarot deck to assist with her creative process. The cards, she writes, can be used to hook into one's intuition and imagination. A way to tell the story, not of one's past, but as an aid in finding clarity in the present or a guidepost as to where one might think about going next.

She has studied the tarot and its uses. At first she just read the cards for herself and then friends started to ask her to do readings for them. In the book, she gives a brief history of tarot cards - they simply began as a card game.

The tarot deck is not a fortunetelling device but more of a 'here's where you are now but maybe think about this and perhaps you could be here.' It consists of the Major Arcana - the archetypes - and the Minor Arcana - circumstances and conflicts. She writes:

The cards depict the whole realm of human experience, from love to death, from joy to sorrow, from loneliness to friendship. Some cards are particularly nasty; others easily cheer a reader up. But either way, you have to take the dark with the light, just like in life.

She writes about each card and offers an explanation of the illustration, its meaning, and what it might represent in your story. These little essays offer fascinating insights into human nature whether one wants to continue to study the tarot cards or not.

The High Priestess
Her card represents wisdom, secrets, and ritual.

She also ends each essay with a list of three or four recommended materials - art, photography, books, music, films - as a source of learning and inspiration.

After writing about the deck, she explains how to lay out the cards - the spread - for different types of guidance: inspiration, creative blocks, creating structure, checking your direction, and bringing your project into the world. Then she offers a sample reading or two for each area.

Finally, she includes instructions on how to do a reading - for yourself or someone else.

I am just barely into the book - or perhaps I should say tarot deck - and am finding it easy to understand and quite fascinating. There is no occult woo-woo here. No black magic or evil spells. Ms. Crispin puts her cards on the table, so to speak, in an entertaining and down-to-earth manner.

I don't think this will in any way send me off on a tarot card reading journey (although it might), but I am merely satisfying a long held curiosity about the cards. And curiosity is what propels a creative, inspired life.

What about you? Have you had any interest in or experiences with tarot cards?
Posted by Belle at 9:00 PM 6 comments:

I don't often write about movies - this is a book blog after all - but I recently watched one that has such literary connections that I can't not write about it.

The film is based on a book that tells the ongoing story of a character in books which makes Mr. Holmes very bookish indeed.

The titular Mr. Holmes is of course that great detective Sherlock Holmes. (We will all agree that he was a real person, won't we?)

The movie is based on the book A Slight Trick of the Mind by Mitch Cullin and finds Mr. Holmes just after World War II living in retirement with his bees on the Sussex coast. He is 93 years old and his memory has dimmed with age. He is watched over by a housekeeper. Her young son Roger - who is quite smart himself - admires the brilliance of Mr. Holmes. Roger often asks Mr. Holmes to "do that thing" where he looks at someone and can tell exactly where they have been and what they have been doing.

Mr. Holmes often disavows his characterization by Dr. Watson as a deerstalker-wearing, pipe-smoking detective. His friend, he says, took a little too much literary license.

Of course because this is Sherlock Holmes there is mystery here. He is trying to remember the conclusion of his last case, the one that sent him into this self-imposed exile many years ago. He struggles to write about it but the details are not quite on the tip of his pen. Roger continues to prod him to finish the story.

Another mystery: What is killing the bees?

The tale moves between the present and the past as Sherlock tries to unlock the mystery of his own mystery.

Ian McKellen is perfect as the aging Mr. Holmes. As one reviewer noted, McKellen's resonant voice sounds as if he has been "gargling honey" for a quarter of a century.

Laura Linney portrays the put-upon widowed housekeeper who finds herself nursing this often crotchety and quarrelsome old fellow. Milo Parker is terrific as Roger, her son. I was quite captivated by him.

The bees play themselves.

The film itself is beautiful and the glimpse of white chalk cliffs in the background in a couple of scenes and gardens and fields of green will make you yearn to be in England. And Mr. Holmes' study. Oh, my! Filled with books and books and books. And his writing desk is just perfect with nib pen, bottled ink, and elegant papers at the ready. I longed to transport myself there to be amongst his treasures.

There are no car chases here. No bloody fights. It is a quiet film that takes an intriguing and poignant look at this beloved aging detective.
Posted by Belle at 7:23 PM 4 comments:

The Brontë Cabinet by Deborah Lutz

Somewhere in the collection of jewelry passed down to me from my grandmother there is a locket containing a snip of hair from a long dead relative. I can't remember now if it was from my great-grandmother or one of my great-aunts. I just remember as a child being fascinated (and a bit grossed out) that anyone would keep such an object.

Yesterday, I attended a lunch and lecture event featuring author and University of Louisville English professor Deborah Lutz. She spoke about this very Victorian practice of saving a lock of hair of a deceased loved one to be woven and placed into a ring or brooch.

A pretty strange practice indeed, this way of capturing the memory of a loved one but one that was so common, Ms. Lutz said, that the art of weaving hair for jewelry became a thriving business with its own tools and instruction manuals.

But it wasn't just for keeping the memory of the dead alive. There was the exchange of locks between lovers or family members. She cited the scene in Jane Austen's Sense and Sensibility when Edward Ferrars is asked about his new ring that is set with a braid of hair. He claims it is hair from his sister but really it is a lock from the cunning Lucy Steele.

Most often though, hair was used in mourning jewelry, woven into wreaths or tied with ribbon and tucked into a book. Ms. Lutz said this was the secularized version of honoring the relics of saints.

Today, she said, parents might preserve a child's hair in a baby album and pet owners might keep a snippet of hair from a beloved dog or cat.

Ms. Lutz also talked about the changing attitudes toward death and dying. Unfortunately, what she didn't talk about was her new book The Brontë Cabinet: Three Lives in Nine Objects. It has been shortlisted for the 2016 PEN Literary Award for Biography. It is published by Norton and is her fourth book.

In it Ms. Lutz takes a look at the Victorian era and the lives of sisters Emily, Charlotte, and Anne through the meaningful objects from their family home in Haworth: the collar worn by a family pet, portable writing desks, miniature books, letters, and walking sticks. 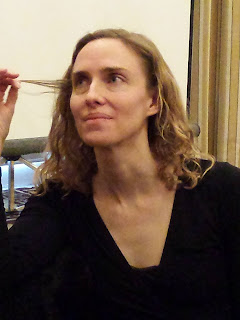 Deborah Lutz after her lecture.

I admit that I am not as fascinated with the Brontës as many readers are (I never did see the attraction of Heathcliff and have never read Jane Eyre...), but this reminds me of the consideration of the life of Jane Austen by Paula Byrne that I wrote about here: The Real Jane Austen: A Life in Small Things. I love this idea of telling a biographical story through objects so I might just have to give The Brontë Cabinet a try. Who knows, perhaps it will lead me to become a Brontë fan after all.
Posted by Belle at 7:41 PM 6 comments: