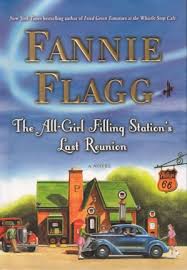 As yesterday March 3 was National Read Across America Day, I did a bit of reading myself and finished up two books that were very, very different.

Although the action in both tales takes place in the South, has at their center an historical event, and are both mysteries - one concerning the mystery of life and the other the mystery of murder - one would not find them cuddled next to each other on the library shelf.

I'll write about one today and feature the other at another time.

The All-Girl Filling Station's Last Reunion by Fannie Flagg is a sweet book. I don't usually read sweet books but I fell in love right away with Sarah Jane "Sookie" Simmons Poole, citizen of Point Clear, Alabama, who has finally gotten through the weddings of her three daughters and is looking for a little deserved down time.

But, she has a lot to contend with.

There is her overbearing mother, the still beautiful, 88-year-old Lenora, known in the family as Winged Victory for her propensity to enter a room with scarves and flowing skirts trailing after her to the accompaniment of the clanging of her bangle bracelets. Lenora considers herself a true Southern Belle and is committed to her real pearls and set of Francis the First silver.

Lenora has bossed about the gentle Sookie all her life - pushing her through ballet lessons, the debutante ball, sorority rush at college, and a hundred home permanents trying to put some curl into her daughter's straight red hair.

Despite her domineering mother's pushing and prodding, Sookie, now 59, has turned out to be a gentle woman who is well-loved by her children, her dentist husband, Earle, and her friends.

When she is not dealing with Lenora's nosy, opinionated ways, Sookie is fighting with the blue jays in her yard that keep eating all the birdseed and not letting the little birds - the wrens and sparrows and chickadees - get their fair share of the goodies. Tenderhearted Sookie spends her mornings trying to outfox the aggressive jays - to no avail.

But Lenora and the blue jays are the least of her problems for one day she finds out that she is not who she thinks she is. Turns out Lenora is not her real mother. The truth is that Sookie was adopted as a baby from an orphanage in Texas, that her real mother was one of four Polish sisters, with a last name containing far too many consonants and not enough vowels to be pronounceable, from Pulaski, Wisconsin, and that her actual birth date isn't really the one she has celebrated all her life. All of a sudden she learns she is not 59 but 60!

Needless to say, Sookie has a hard time absorbing all this new information and it sends her on a journey to find out about her birth mother. She takes to meeting the town's psychiatrist at the Waffle House out on the highway for sessions to help her deal with her discovery.

This story, in Ms. Flagg's hands, is engaging and funny and heart-warming and, well, sweet. Ms. Flagg certainly loves her characters and gives them funny little quirks without making them seem grotesque. Their idiosyncrasies are always grounded in the real world.

Through chapters that take the reader to Pulaski in the 1930s and '40s,  we learn that the sisters' father owned a filling station and not only did the girls work at the station they all ended up taking flying lessons from a barnstorming pilot who came through town. When World War II began they joined the WASPs - the Women's Airforce Service Pilots - and ferried planes from factory to bases from which they would be flown oversees.

Through the eyes of the sisters, Ms. Flagg enlightens the reader about the WASPs, the first women in history trained to fly military aircraft. Their story is filled with the discriminatory treatment by their male counterparts. To add insult to injury, the women were never officially recognized as being part of the military and therefore were not entitled to any service benefits when the war was over.

In the end, Dear Sookie finds not only her real mother but her real self as well. And there are many other happy endings along the way. Fannie Flagg gets my vote as someone I would most like to sit with on the veranda, drink sweet tea, and chat.
Posted by Belle at 2:47 PM