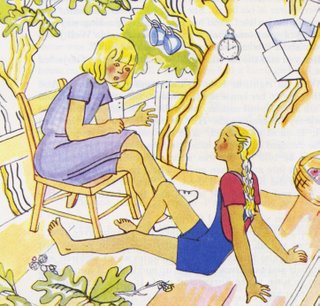 Garnet (with the braids) and her friend Citronella
enjoy a retreat in their tree house during
Thimble Summer.

If you are already bored with summer, perhaps you might enjoy stepping into Thimble Summer by Elizabeth Enright. First published in 1938, Thimble Summer is about a way of life, that has all but vanished, on a small farm in America's Midwest.

It is an account of the summer of 10-year-old Garnet Linden. Her lucky summer, as it turns out, after she finds a silver thimble in the mud while walking along the dried-up river bank. A river whose waters are slowly sinking lower and lower due to the drought.

But once Garnet holds the thimble in her hand, things begin to change. The rains come and the summer turns out to be one she won't soon forget, nor will the reader. Garnet's days are filled with adventure and friendship, bus trips and barn raisings, dime store shopping and chicken chasing, the slow fattening of her hog Timmy, and a day at the fair that includes three ice cream cones and a blue ribbon.

This tale captures the sights, sounds, smells, tastes, and joys - along with plenty of hard work - of living on a farm before televisions, cellphones, and computers. I read it in two sessions over the recent cool weekend while sitting on my front porch. It was the perfect setting.

The book won the Newbery Medal in 1939. Read it and you will see why. The color illustrations and line drawings created by the author are a bonus.

Here is the account of Garnet's awakening on Fair Day:

Garnet woke up early. Before she was quite wide awake she lay with her eyes closed, half afraid to look for fear it might be raining. But even with them closed she knew it was going to be all right because the color behind her lids was clear and rosy and she knew the sunlight lay upon them. And she heard crickets in the meadow, and a fly buzzing against the screen, and somebody whistling outside. So it was all right and she opened her eyes. Oh what a day! She held up her arm in the sunlight; all the little hairs on it glittered like fine gold, and her closed fingers were ember-colored as if there were a light inside them.