About a year ago, I wrote of the British Library Crime Classics with their terrific, artful covers (here). I never did get around to purchasing any of these delights, but I recently discovered that my library has added 15 or so of them to its ebook collection.

I have been reading them in between other books and so far have read three. Each of the ones I have read is a collection of short mysteries edited by Martin Edwards who introduces the stories with information about the author.


Murder at the Manor: A gathering of suspects and victims at a variety of country houses. A favorite setting of mine. Oh, how wonderful to spend a weekend - without a murder, of course - at one of these stately British homes. 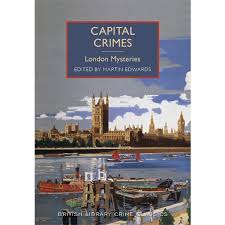 Capital Crimes - These short mysteries by various authors all take place in London. Stories by Margery Allingham (author of the Albert Campion series) and E.M. Delafield (Diary of a Provincial Lady) show up in this one. It was fun tottling around London via these stories.

Resorting to Murder - I found this just in time to read and enjoy on summer vacation. These mysteries all take place in holiday locations - the Swiss Alps, seaside towns, a small hotel in Paris. Sherlock Holmes shows up in this collection as he takes a well-earned rest in a "cottage near Poldhu Bay, at the further extremity of the Cornish peninsula."


Although The White Cottage Mystery is not part of the British Library series, its cover is just as attractive. It is one of the stand-alone crime novels by Ms. Allingham and I was led to it by her short London mystery.  The story involves the murder of a blackmailer who just loves to hold on to secrets and torment his victims with exposure. Nasty fellow. A terrific read featuring a Chief Inspector Challenor and his son (who has a romantic crush on one of the suspects) and a denouément that quite took me by surprise.
********

In other news, I was saddened to read of the death of Carolyn See. She wrote mostly novels - I think she put Southern California on the literary map. One of her non-fiction books, Making a Literary Life: Advice for Writers and Other Dreamers, I hold dear to my heart. Unfortunately I don't own a copy and I see that my library no longer has the title in its collection (darn that discard policy). I read this book many years ago, it was published in 2002, and found it to be funny and tender. One piece of advice that I still remember was to write a "charming note" to those who helped you on your way to becoming and being a writer. Alas. A suggestion I have often recalled but not so often acted upon.

I will definitely be on the lookout for this book to add to my shelf of writing books.

Have you read Making a Literary Life or any of Ms. See's novels? Any recommendations?
Posted by Belle at 9:49 PM