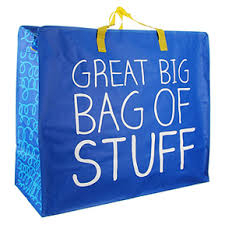 As noted a few weeks ago, as a Christmas gift to myself, I hired a professional organizer to help me get rid of the overflow of stuff around the house. (here) So while most people have been dashing about malls and department stores in a shopping frenzy, I have been busy getting rid of things.

Lori the Organizer and I have had four sessions of two hours each. That's about all I can deal with at one time. We have attacked the clothes closet, the pantry/laundry space, and the kitchen cabinets and drawers. Yesterday, we dealt with what the dust bunnies had been guarding under the bed, and we sorted through a few shelves of notebooks, gift bags, tissue paper, and canvas tote bags.

Whew. In all, she has carried away two bins of clothes and shoes, five large tote bags of kitchen and pantry stuff, and yesterday, two bags of linens and the other miscellaneous items that had been hiding behind closed doors.

Add to that a trash bag or two and the house does seem to be a bit lighter.

I decided early on into the process that I wasn't going to worry about sorting out books. They are not clutter. Well, most of them anyway. My one rule - made after I tearfully waved goodbye to a jean jacket from the '80s - was that if it made me cry to get rid of an item then that item stayed!

I have also spent many hours on my own sorting, organizing, and tossing art and craft supplies. That in itself was a gargantuan task, but I do believe for the moment that area of my life is tidy.

I tell you all this because with the holidays and the clearing out project, I haven't had much time to read - or honestly to even think about reading - except at bedtime.

I did keep warm and cozy under the covers with Alexander McCall Smith's latest No. 1 Ladies' Detective Agency mystery The House of Unexpected Sisters. In this adventure, Mma Ramostwe has an unsettling family mystery of her own to solve so she turns over the case of a woman who was allegedly fired from her job for an unjust reason to her agency partner Grace Makutsi. After many cups of tea and a slice or two of Mma Potokwani's delicious fruit cake, both mysteries are solved and all ends well.

Just last night I finished A Fool and His Monet by Sandra Orchard. Serena Jones is an FBI agent with the Art Crime Team. She joined the investigative agency in hopes of one day solving the murder of her grandfather by an art thief during a robbery. The action in the first of this promising series takes place in St. Louis. There are a few stereotypical characters - Serena's mother reminds her often how she would love to have grandchildren; her goofy Aunt Martha loves a good mystery and somehow entangles herself in this one; and, of course, there are two handsome men who could possibly provide romance. But, that said, I enjoyed the puzzle and quite liked Serena.

On a sad note, a favorite author and fellow Louisvillian Sue Grafton died over the holidays. I have read and enjoyed all of her Kinsey Millhone books up through V is for Vendetta. I once lived near Santa Barbara - her fictional Santa Teresa - and it was fun to read about and recognize those familiar coastal locales in her books. Her last mystery, published in August 2017, was Y is for Yesterday so I do have a few 'letters' left to read.

As her family said after her death, for them, and many of Ms. Grafton's fans, the alphabet now ends in Y.


I snapped this (somewhat fuzzy) photo of Sue Grafton
in November 2013 at the Kentucky Book Fair.
Posted by Belle at 9:42 PM