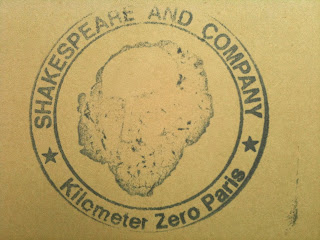 An added weekend bonus: my order from Amazon arrived yesterday. I dove into the copy of Paris Was Ours edited by Penelope Rowlands.

I read "My Bookstore High" by Jeremy Mercer a 10-page excerpt from his book Time Was Soft There about living in Paris. This being about a bookshop in Paris I figured it would be about Shakespeare and Company. It is, but it is about a little more than a visit or two to the famous Left Bank bookshop. Mercer lived at S&Co. while down and out in Paris. George Whitman, who owned the store, let young writers live and work there. Whitman died in 2011 at the age of 98 and his daughter Sylvia Beach Whitman runs the store now.

Of course, the daughter was named after the Sylvia Beach who first opened the bookstore known as Shakespeare and Company in Paris in 1919 and attracted many writers of the time including Ernest Hemingway, James Joyce, and Gertrude Stein. It closed in 1940 during the German occupation of France and never reopened.

In 1951 Whitman, like Beach, also an American, opened Le Mistral, an English-language bookstore in Paris, and in 1954 changed its name to Shakespeare and Company as tribute to the original.

So Mercer tells a part of the tale of coming to live at the bookstore and how he learned to eat cheap in Paris by going to art openings and munching on the treats served there. In this excerpt, he and three new friends who live at the store go to a student cafeteria and get a fine meal of salad, lamb, roasted potatoes, green beans and yogurt for about two dollars. During the meal, one of them jumps up occasionally and snatches bread and cheese left by other diners to take back to the store for late-night snacks.

The book I purchased on my last trip is a collection of essays by Czeslaw Milosz titled Proud to Be a Mammal. An odd selection I admit. The title page warns that these are essays on war, faith and memory by the Polish author and poet who died in 2004.  Odder still is that Mr. Milosz is mentioned by Frances Mayes in Under the Tuscan Sun which reminded me that I had this book. She met him at her university and had to introduce him to an audience sternly reminding herself not to call him 'Coleslaw' which is what she called him in her head before learning how to correctly pronounce his name.

I have no idea how his name is pronounced, so Coleslaw it will be from now on.
Posted by Belle at 5:59 PM

Email ThisBlogThis!Share to TwitterShare to FacebookShare to Pinterest
Labels: Czeslaw Milosz, Paris Was Ours, Under the Tuscan Sun