In Which Belle Visits A Grand Old Hotel

The Seelbach Hotel circa 1907

Yesterday, I had lunch at one of our local literary sites.

The Seelbach Hotel has graced the corner of Fourth and Walnut Streets in Louisville since 1905. Governors, presidents, prime ministers, and even puppets (Miss Piggy) have stayed in the elegant hotel. Rock stars, fire, and flood have assailed its hallways. In the 1920s, certain gangsters - most notably Al Capone - did a little high-stakes, illegal gambling in a room with a hidden door that opened onto an underground escape tunnel in case the police raided the place.

The hotel has seen many owners over its 100-year history as well as major restorations and hard times. At one point in the 1970s,  the hotel was closed totally. 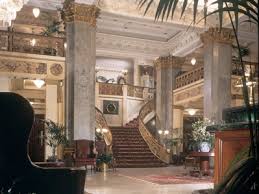 A view of the lobby's grand staircase

Yesterday though, its lobby was filled with the scent of bouquets of fresh white lilies and contained comfortable couches and chairs for the ease of the weary traveler. The polished wooden railings of the lobby's grand staircase glowed with pride. The Old Seelbach Bar, where I had my first legal afternoon cocktail many years ago, was empty on this snowy afternoon save for the bartender and his shot glasses and bottles of spirits.

I went downstairs and took a look inside the hotel's famous Rathskeller, decorated with Rookwood Pottery, which had been the scene the night before of a private banquet and party. I'll bet the pelicans that decorated the columns and the decorative tiled walls and vaulted ceilings could tell some stories from the time this room served as a nightclub after Prohibition was repealed and later as a private club.

I learned all this from a small hardcover book that the handsome fellow at the front desk gave me...probably so I would stop pestering him with my questions about the history of the hotel. The book is simply titled The Seelbach - A Centennial Salute to Louisville's Grand Hotel. It relates the history and stories - including at least one ghost story - of the hotel and recounts some of its famous and infamous guests. All this information was compiled by Larry Johnson, former bellman and current concierge for the Seelbach.

The book showing the hotel's entrance on the cover

The 125-page book contains some marvelous vintage photographs of the hotel through the years. It was fun to read about some of the goings on in the old place.

But as to its reputation as a literary site?

Well, in 1918, a certain 2nd Lieutenant was stationed at Camp Taylor, an Army training camp near downtown Louisville. He often visited the Seelbach - its Rathskellar served as the local USO during World War I. One night, this young soldier must have been a little too homesick and he had a little too much to drink. His rowdy behavior got him kicked out of the hotel.

Years later, the young man was making his way in the world as a writer. His memories of Louisville and the Seelbach Hotel show up in his tale of a young woman from Louisville and a gentleman from New York and their wedding that is held in the Grand Ballroom of the hotel. The couple are registered as Tom and Daisy Buchanan. The book, of course, is The Great Gatsby by F. Scott Fitzgerald.

The lobby restaurant, in which I had lunch yesterday, is called Gatsby's. Now, it doesn't get much more literary than that, does it.
Posted by Belle at 1:10 PM