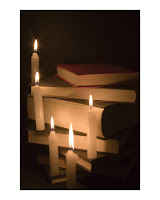 Have been so busy getting my new computer set up I haven't had time to read except right before bed.

Can you imagine having to read in bed by candlelight? It doesn't seem like a very safe practice but I am sure it was done before electricity lit our world.

I did watch the 1993 film version of The Three Musketeers with Charlie Sheen, Oliver Platt, Kiefer Sutherland, and Chris O'Donnell as D'Artagnan. Believe me it was nothing like the book except for the names of the characters and that it took place in Paris. I must say it was lively though and Tim Curry as Cardinal Richelieu was deliciously wicked. I thought Oliver Platt made a splendid Porthos.

So now, this year, I have seen three versions of The Three Musketeers, watched  The Four Musketeers (the sequel to the 1973 film) and read the book. I think I am finished with the boys.

Email ThisBlogThis!Share to TwitterShare to FacebookShare to Pinterest
Labels: The Three Musketeers movies