The fans were aflutter yesterday at the Jane Austen Festival held on the grounds of Locust Grove Historic Home. It was a lovely setting - hot but with plenty of shade and an occasional cool breeze.

I arrived just after the gates opened at 10 a.m. - the gates being four women on either side of the entrance collecting the $12 fee and giving directions to parking. It all went very smoothly and within minutes I was surrounded by women and men dressed in Regency fashions. Bonnets and reticules and Empire-waisted frocks abounded. It was really quite delightful. 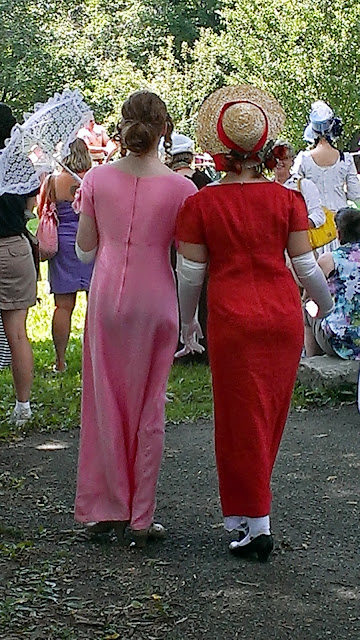 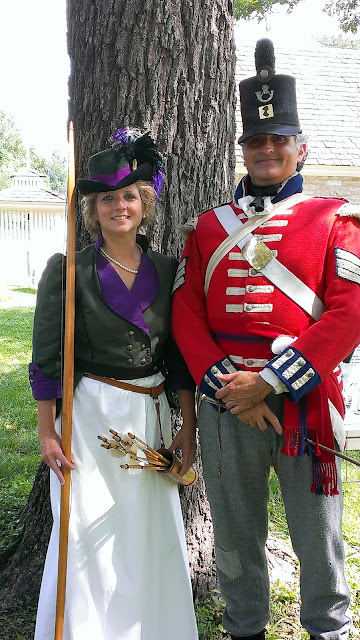 This handsome couple was visiting from Canada 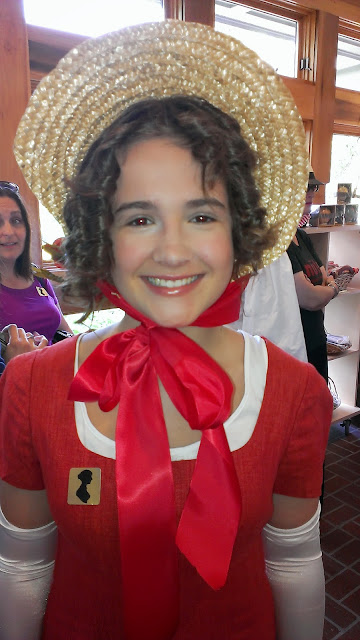 I was hoping to snatch a seat at one of the five teas that were being held but they were all sold out.

On the grounds women and men paraded about among the trees and sauntered in and out of the tents set up as shops selling all sorts of period jewelry, parasols, floor cloths, bonnets and hats, and chatelaines. Some folks rested at picnic tables. I found a nice long bench in the shade of the house and just people-watched for a while.

The large main tent was set up with chairs and hosted a play, a Regency fashion show, and a entertaining presentation called "Dressing Mr. Darcy" in which a handsome young man, Brian Cushing, deconstructed what men wore in Ms. Austen's time: the hat, the cravat, the waistcoat, the braces (suspenders), the undershirt, the pants, socks, and boots.


From the style show: 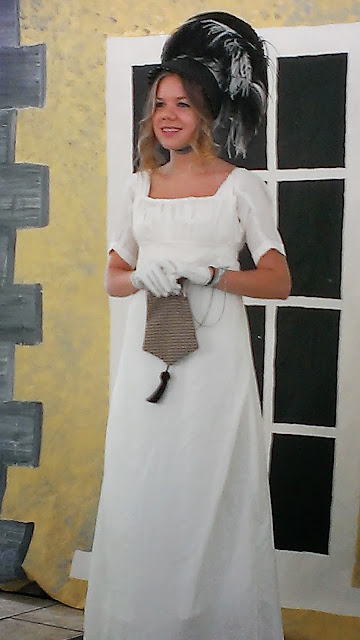 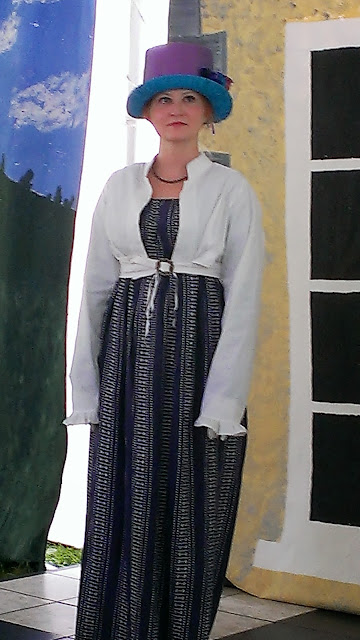 The jacket comes off ... 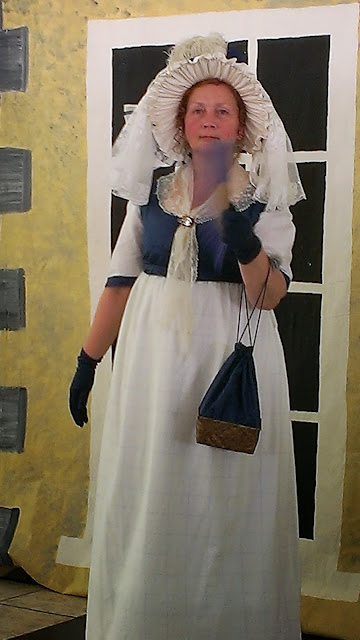 That blur is her fan 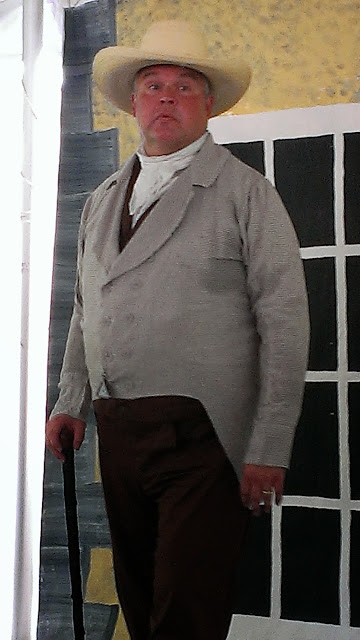 I saw a bare-knuckle boxing match and a duel between gentlemen. A fellow with a sedan chair was giving short rides. 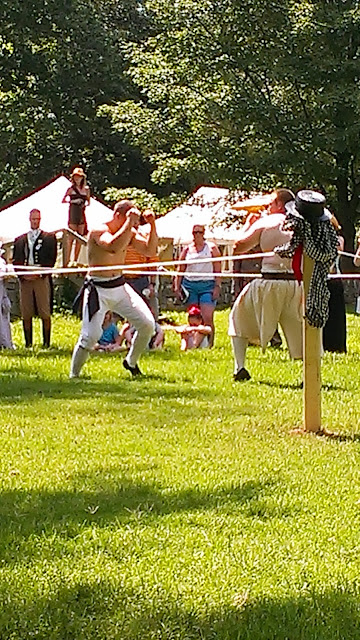 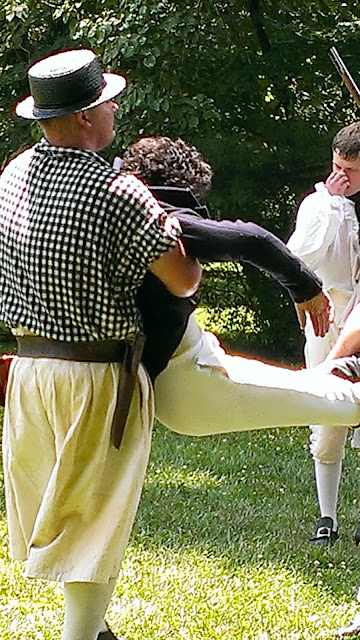 The loser in the duel between gentlemen 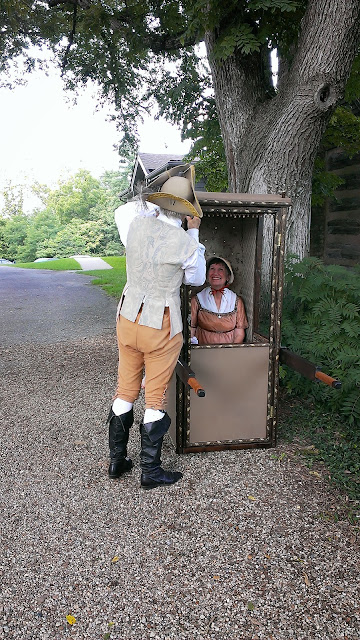 One mode of transportation - the sedan chair

My favorite booth was the paper marbling demonstration by artisan John Bielik from Missouri.  It is always fascinating to watch an artist at work and John certainly kept his audience engaged. Of course I had to purchase a sample of his work in the form of a small notebook with a marbled paper cover. 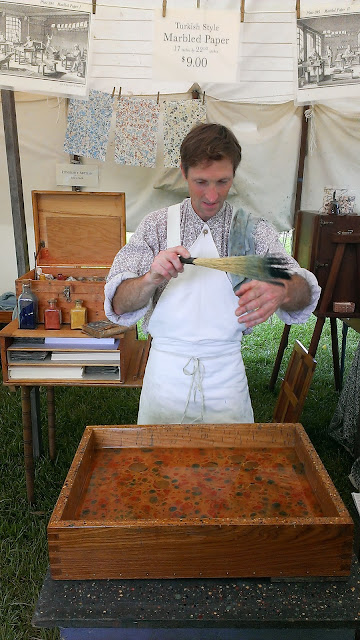 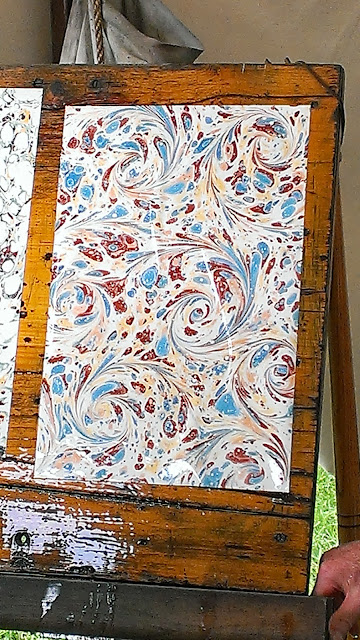 
I chatted with some of the Janeites and discovered they were from as far away as Ontario, Canada and Dallas, Texas. Others were from closer to home, Columbus, Ohio and Frankfort, Kentucky. Most of the ones I spoke with had previously attended this festival, now in its sixth year.

By 1:30 I was worn out from the heat and the activity. I can't imagine how warm some of the women were and especially the men in their heavy coats. I left before the panel discussion with authors of books of sequels and alternative endings to Austen's works. That wasn't happening until 3:30 and I would have melted into just a little damp puddle on the ground by then.

There was to be a Grand Ball last evening and tickets to that were sold out. I am sure it was a success.

The event organizers are to be applauded. The festival was well-attended and today, Sunday, is another day for people to enjoy - more teas and the same activities and events. It was a very civilized and elegant affair.
Posted by Belle at 11:29 AM