The Swerve and a bit of Paris 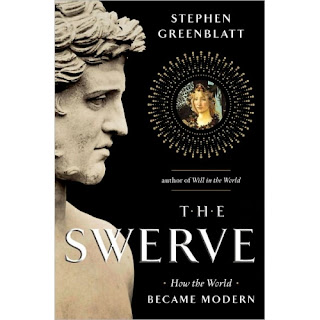 My trip to Paris has been delayed because I am caught up in reading The Swerve: How the World Became Modern by Stephen Greenblatt. It is a fascinating book about one poem written 2000 years ago, lost, then found in the 1400s and how the ideas and philosphies of the poem helped usher in the Renaissance.

The main guy, an Italian named Poggio Bracciolini, was a book-hunter and was on the quest to find Greek and Roman books that were rotting away in monastery libraries. The poem he found was On the Nature of Things written by Lucretius, based on the philosphy of Epicurus.

Here is a warning tale: As the Roman empire crumbled...

..the whole Roman system of elementary and higher education fell apart. What began as downsizing went on to wholesale abandonment. Schools closed, libraries and academies shut their doors, professional grammarians and teachers of rhetoric found themselves out of work. There were more important things to worry about than the fate of books.

Why does this sound like something out of today's newpapers?

Anyway, on to Paris. One of the books on my list is Paris Was Ours which I bought in March and read a story here  and here. I have read quite a few books this year that regale the wonders of Paris and if you have not read The Greater Journey by David McCullough I highly recommend it. It will have you swooning.

Email ThisBlogThis!Share to TwitterShare to FacebookShare to Pinterest
Labels: Paris in July, Paris Was Ours, The Greater Journey, The Swerve