Here are some random notes from the Carl Sandburg home tour at Flat Rock, North Carolina:

>>The Sandburgs were the fourth family to own the home built in 1839. It was originally called 'Rock Hill' but the third owner, a fellow of Irish ancestry, changed it to 'Connemara'.

>>The Sandburgs bought the house and its 246 acres in 1945. At the time of the move, Sandburg and wife Paula were living in Michigan; he was writing and she was raising goats. She wanted a warmer climate; he wanted peace and quiet.

>>Paula found the house, decided it was perfect, and remodeled and modernized it. She had bookshelves built in every room. She had the home completely finished and furnished and organized before Carl moved in. All he had to do was sit down at his typewriter! 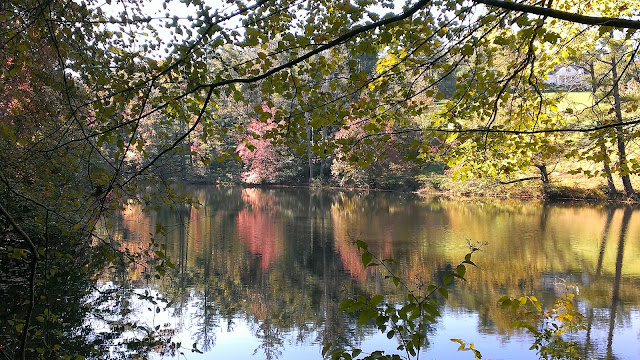 >>They lived in the house with their three daughters, Margaret, Janet, and Helga, and Helga's two children.

>>The first floor has a front parlor/reading/music room; a dining room that looks out of the back of the house; a kitchen; Paula's office from which she ran the goat farm and kept her extensive breeding records; another office that Carl used; and a large bedroom with bath where Paula slept.

>>At the top of the stairs is a landing with shelves filled with more books; Carl's writing room and his bedroom; a guestroom that Paula originally set up as Carl's writing room but he thought the view was too glorious so he moved his typewriter to the room in the back; two bedrooms used by the daughters and the grandchildren; and a small bathroom.

>>Carl wrote by night and slept by day. Paula and the family kept the opposite hours as there was milking to do and farm chores to take care of. Sometimes, in the morning, he would wave to them from his upstairs window as he was preparing for bed and they were just starting the day and heading out to the goat barns. 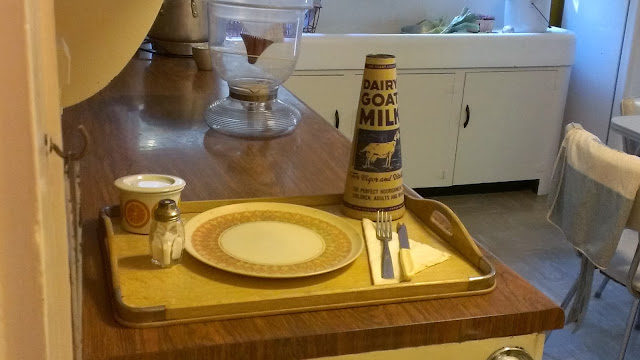 >>The family always gathered together for dinner to discuss the events of the day. Sometimes, Carl would read from the writing he had been working on. 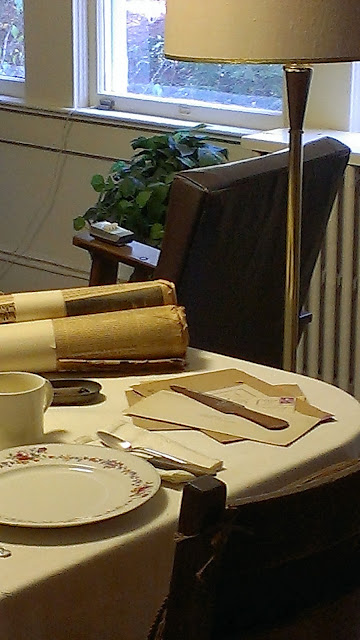 His seat at the dining table - newspapers and his mail at hand. There was a television in this room given to Sandburg by Phillips Electronics. Notice the remote on the arm of the chair!

>>There was singing in the evening - Carl loved American folk songs. He hated the television and rarely watched it calling it 'a waste of time'.

>>After Sandburg died in 1967 (at the age of 89 at Connemara) Paula sold the house and farm to the National Park Service and donated the contents of the house as a memorial to her husband. It took almost seven years for the NPS to catalog the contents: index card records of the goat farm; Kleenex boxes; chairs and footstools; bedspreads; kitchen utensils; magazines and newspapers; photographs; busts of Sandburg and Lincoln; and all the ephemera related to his writings. 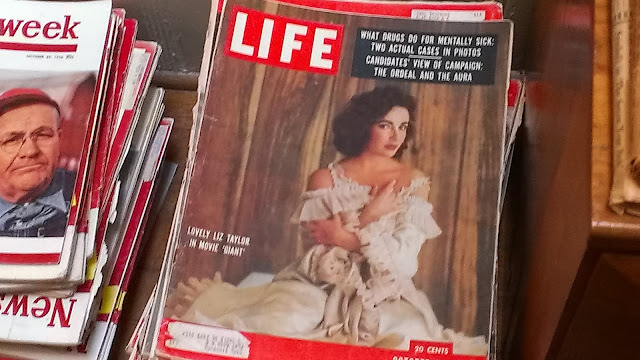 >>There is a wonderful video presentation shown to visitors. One is of Carl Sandburg (in his 70s) being interviewed at the house by Edward R. Murrow. Sandburg sings (badly but enthusiastically), reads aloud from his poetry, and tells the four things he needs to be happy: to not be in jail, to have his work published, to eat good food, and to love and be loved. (I think I got that right!)

>>There is also a video interview with wife Paula and one with granddaughter Paula Steichen about her life growing up at Connemara.

The home and the tour guide information really piqued my interest about Sandburg. I bought a book about the house with many photos, his granddaughter's book about growing up at Connemara, and Sandburg's Chicago poems. Surely these will help to satisfy my curiosity!
Posted by Belle at 3:47 PM